The 2022 KWPN Stallion Selection will go down in history as the stallion show of Stal 104. Willeke Bos not only had five dressage stallions appointed to the performance test, no fewer than three out of four premium stallions originated from her stables.

The most remarkable aspect is that all stallions are out of her breeding program. Hence, reason enough to visit this ambitious breeder of Wijdewormer.
It’s the Thursday after the stallion show when we head to the North-Holland countryside. There, just on the outskirts of Amsterdam, at the end of a long polder road in the wetlands of Wormerland, we find both the stable and residence of Willeke Bos. The kitchen table is still covered in flowers. Each bouquet has a card attached, messages of congratulations after the incredibly successful weekend in Ermelo. Willeke is still a little dazed herself. “Flabbergasted’, is the first word that comes to mind according to the cheerful breeder. 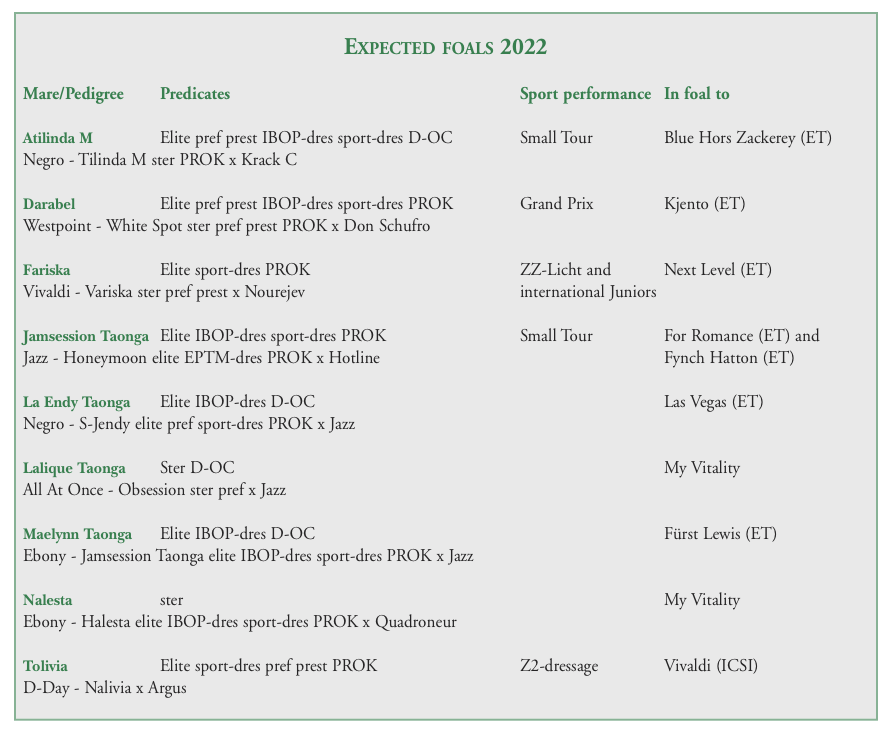 “It all started in December,” Willeke begins her story. “It was already special on its own that all six of our stallions advanced to the second-round viewing. Up-front, you form an image of the stallions. Opoque is such a fantastic animal, there is a reason Helgstrand already bought half of him at the first-round viewing. I was able to breed him by trading an embryo with the Nekeman family. They were keen on having an offspring of Atilinda and chose the stallion Boston STH for her. I used All At Once on their mare Ice Princess STH, a well-tested daughter by Davino V.O.D. out of the renowned Vurona-line. One-Two-Three, the full brother of Vitalis, and the Vitalis son Obsession are also beautiful horses in my opinion. If you stand in front of them, you truly see sires in them. So, yes, my expectations of them were high. And then we had Otazu, he descends, just like Opoque, from our home-bred All At Once and did surprisingly well.
The Deparon US son Oklahoma could go either way in my eyes. Not because of his qualities, but he sometimes can crawl back into his shell. I think and hope that he will do extra well under saddle, since he then has the support of his rider. But now he had to do it all by himself; I was seated at the grandstand with my fingers crossed. It’s always a wait-and-see moment at the stallion show. You may think the world of a horse, but the jury looks at them differently. So many people, so many visions. But what a fantastic result, I still cannot wrap my head around it.”

Bos only started to become serious about breeding in 2008. “I had already bred some foals, but it was up and down, no structure. I rode dressage with a jumper mare myself, so my breeding was quite inconsistent. The foals were nice, but never extra-extra. So, we went on the search for a good broodmare, but that was not easy. They were either of senior age, or not in foal, or ridiculously expensive. And I noticed that the truly good broodmares were seldom for sale. Thus, my husband Patrick van Nek and I decided to buy foals at auctions to get our hands on the right bloodlines and have youthful mares by modern stallions. We went everywhere that summer: From various central inspections to the National Foal Championships and stallion shows. All to get a good image of the foals born that year. We bought fillies and colts, 20 in total. And there were very good horses among them. To start, Vitalis, he needs no introduction. But also Honeymoon, a daughter of Hotline.”.. To read the complete article you need to be a subscriber

RIP Breido Graf zu Rantzau: His legacy will live on