In March 2022, the Brazilian Association of Sport Horse Breeders (ABCCH) inaugurated its ‘Field Day’ – a project created by the recently elected board for the 2021-2024 office mandate under the re-elected presidency of Gabriel Nicolau Khoury.

In order to gather together breeders and associates into a more active and integrated participation through the exchange of learning experiences, the venue of the first edition of the event was Haras Terra Brasilis – a studfarm managed by its owner, João Batista Evangelista. The event took place in Mairiporã, a city located in the countryside to the north of São Paulo.
The seasoned German rider Sebastian Rohde, a young- horse development specialist, and widely experienced with the Holsteiner and Oldenburg Studbooks, was invited to conduct the event’s activities. Rohde had already visited Brazil many times to teach, conduct clinics and workshops, and judging for editions of the Brazilian Sport Horse National Festival.
ABCCH’s president opened the event by welcoming all participants and thanking Sebastian and the hosts for the structure, warm reception, and availability. The theoretical component, for which Gabriela Placco acted as interpreter, covered topics such as breeding, initiation, and training of high performance sport horses. Thirty people attended the event, including associates, riders, and other participants interesting in showjumping and dressage. Later, everyone was escorted to the arena where they could observe practical activities for the qualification and initiation of young horsesin Brazil. 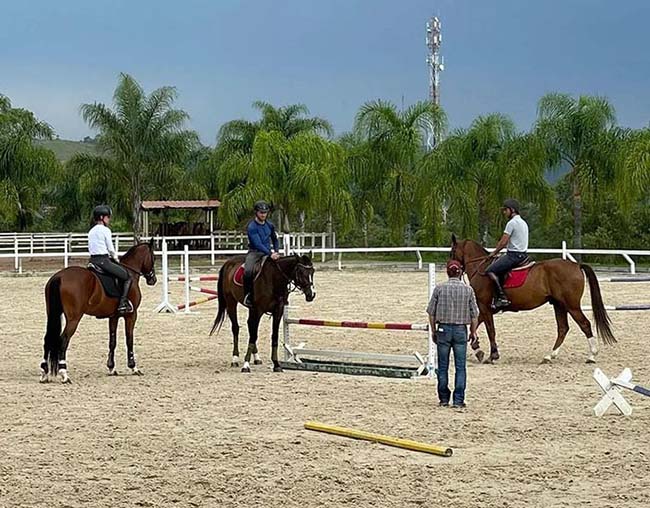 Representatives of the major Brazilian breeding farms attended the event, such as Haras Cachoeirinha, Haras da Essência, Haras Flores, Haras For, Haras Gabs, Haras Ipiranga, and Haras Terra Brasilis, alongside riders and associates. A lunch-eon party was hosted at the con-clusion of the event. According to Koury: “It was a very pleasant event with lots of learning oppor-tunities as well as the exchange of exp-eriences in a light, relaxed environment. We are looking for-ward to the upcoming events.”
Young-horse development clinic
For a couple of days prior to the event, Haras Terra Brasilis, in partnership with ABCCH, was responsible for organizing a showjumping clinic with Sebastian Rohde, aiming at the development of young horses. Professional and amateur athletes were split into two distinct classes, which also counted an enrolled audience.