At the conclusion of the 2018-2019 WBFSH breeder rankings year, Dr. Hilmer Meyer-Kulenkampff was honoured with the top eventing award for fischerChipmunk (Contendro I - Havanna 71 x Heraldik xx) – who has, to date, enjoyed a splendid competition career that began with victories in young horse classes.

In fact, his career was launched as a five-year-old when he won the German young-horse championship at the Bundeschampionate in Warendorf in 2013 under the saddle of Julia Krajewski. She got him under saddle when he was four-and-a-half, and built him into a world championship contender at the World Equestrian Games in Tryon in 2018.  Remarkable results that have since continued in the hands of the German eventing magician, Michael Jung.

More than 100 years of breeding history

This bloodline has been in the family of Dr. Meyer-Kulenkampff for over a century, and counting...
Q What can you tell us about this damline?
This damline can be traced back to 1906. The Trakehner mare who started the line was purchased by my great-grandfather. Forty years later war refugees came to the farm in Lower Saxony for shelter, including the Graf Dönhoff family who brought two Trakehner mares with them. One of these mares was in foal and gave birth to a colt, which my father purchased. This colt matured quite early and when he was only two put a grand lady (Schwalbenflug x Firnis x Schwalbenflug, old Hanoverian blood) in foal. She was already an old mare, and produced a top filly.
When I finished my pony time I had great success with her at shows in my area in jumping and dressage. We took her out of sport to let her be covered and she stayed in our family. My godfather, Tonne, bred her first foal because I wasn’t yet 18. However, when I reached my 18th birthday I became right away a member of the Hanoverian Studbook. I then also took over the mare for breeding, and when I was 22 I had my first horse in the Elite Auction in Verden. So my first foal was a really good foal. She produced also a top filly  and I am breeding now with the eighth generation out of this line. The foundation of this line is a mix between Trakehner, Hanoverian, and Holsteiner blood (Ramiro).
Q What does breeding mean to you?
I would like to answer this question in two parts. First, the philosophical approach for me is nothing more than a rational and accelerated evolution. That is how my understanding of breeding is, about how to reach a breeding goal. Evolution will continue, and with my breeding I am directing this in a certain way. Will I breed a dressage horse or a jumping horse? This has been evolution for the past 200 years.
Previously, breeding was very limited because of the distance to the stallion station, so everything was very local. So you had a stallion that was used at a distance of 50 kilometres around the stallion station. Now breeding has become much more international and I personally see stallions in France that I want to use.
The other approach is that my grandfather and my father have always been breeders. The farm had already been in our family for 700 years, and a farm was always a form of breeding. In my grandfather’s time, and earlier, the horse was always an economic factor until it was replaced by the tractor. I still remember personally from when I was 10, that my grandfather had six Belgian cold-blooded horses and ten Oldenburgers, as well as some lighter built horses. Like, for example, the Trakehner mare that was purchased by my great-grandfather. The Belgian horses had to do the hardest work, while the Oldenburgers were used for lighter work.
We all knew what we had with this motherline that comes from the Trakehner mare because my family has built up the line over generations. Through the covering of the Trakehner colt on the Hanoverian mare the line received another infusion of Trakehner blood. Than we really realized what kind of quality had. My grandfather made very clear that we had to cherish and to take care of this motherline. For me it is also important that I try to keep the best genetics in Germany. For fischerChipmunk I had many offers from outside Germany, but I want to keep him in Germany. Also with my recently approved Diamant de Semilly x Sandro stallion I have received many offers from outside Germany, but I want to keep him in Germany...To read the complete article you need to be a subscriberCLICK HERE TO SUBSCRIBE TO BREEDING NEWS 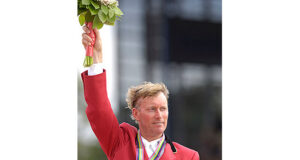