No fewer than six horses exceeded the one million euro price mark in auctions this year, all during the last quarter. And, if new auctions are now confirmed, traditional sales like PSI or those that take place during the various approvals in Germany always represent safe values and react well to a constantly changing market. And a stallion like Chacco-Blue, with a turnover close to five million euros for his offspring has never been seen before!

If the number of horses sold has continued to increase over the whole year, the volume sold in the last quarter of 2018 has been eclipsed in 2019 – a massive 36% increase: 1,614 horses sold from in the quarter ending December 2019, compared to 1,187 sold in 2018).
The increase in online sales has now also been cosolidated, and new concepts are emerging. For example, we are now seeing more rhinestones and sequins in the pedigrees of the horses themselves, with blue-blooded ancestral papers. Similarly, impressive in the last quarter were the prestigious shows hosting auctions, such as the ‘Auction by Arqana’ at the Bouglione Circus in the French capital during the Longines masters of Paris in early December. Very glitzy and glamorous events, with a limited number of exclusive horses for sale in the same conceptual vein as ‘The Ten Auction’ when specialists draw up the selection of horses to be sold.
This tradition is still widely accepted and, indeed, expected with the PSI sale which celebrated its 40th anniversary this year, and which again posted great results  that produced seven of the top 10 prices of this quarter.
The promoting of ‘self made’ stallions is an important part of the sales work and, if, thanks to ICSI, not all Chacco-Blue offspring are sold in sales linked to PSI, the various sales have contributed towards creating prominent stallions thanks to famous German promotion, such as Messenger, Conthargos,Vivant van de Heffinck, or even London, who was listed in the PSI catalogue a few years ago.

During this 40th PSI Auction, V-Plus Gold (Vivaldi), a full brother to Harmony’s V-Plus, the top price of the 39th PSI edition, was sold for €1.3 million to lucky new owners, the Luxembourg-based stable Dressage Grand-Ducal. Frederic Wandres will continue riding this exceptional stallion with the goal of qualifying for the world championships for young dressage horses. V-Plus Gold was also one of the personal highlights for dressage PSI co-founder Ulli Kasselmann. “I know all the horses very well, but V-Plus Gold in particular has developed enormously over the past few months and is now going into the best of hands. They have been great friends of PSI and have also given us the opportunity to continue his further training and preparation for the big sport.”
Brisbane (Bordeaux x Sir Donnerhall) was the second most expensive dressage horse which was sold to American Leslie Malone of Harmony Sport Horses for €1.05 million. This stable also bought Zomancier (Zonik x Fürst Romancier) for €350,000.
The highest selling jumping horse, Chacco’s Lando (Chacco-Blue x Lando) followed soon after. This exquisitely bred stallion is closely related to Ukato, who has gained great success with Willem Greve, or the amazing Explosion W with Ben Maher. Chaccos Lando sold for €1.25 million, while another  jumping horse, Chadonia PS, sold for precisely €1.00 million...To read the complete article you need to be a subscriber 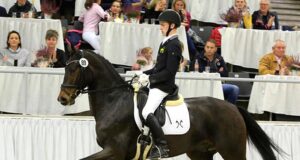