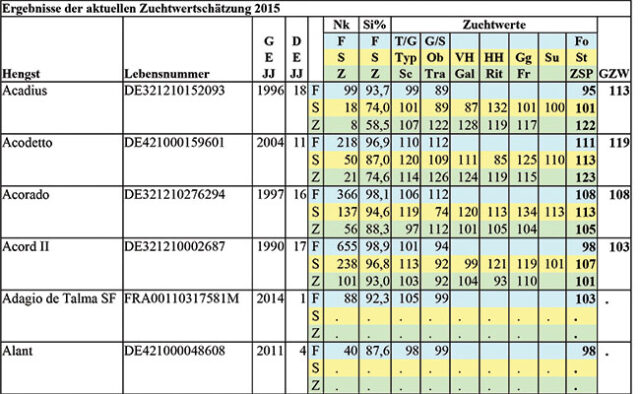 Analysis by Christopher Hector: It’s time for my annual rant about breeding values… For the second year running, Staccato Gold (Stakkato - Wertherröschen x Werther) is the number one ranked German jumping sire on the FN breeding stallions with a value 173 (accuracy 0.88), and he is, once again, hailed by my friend, Ludwig Christmann in his annual review in The Hanoverian: “The outstanding success of still-young descendants in international competitions verify the high breed value of 173 points. Out of 122 show horses with placings, 34 successfully compete in jumping classes at the S-level, while the oldest descendants are only ten years of age.

“Nine sons or daughters are recorded in the Hanoverian Stallion Yearbook with lifetime earnings of at least €15,000. Another seven horses are listed in the world rankings of the WBSFH. Shorapur out of a dam by Drosselklang II was one of last year’s most successful Hanoverians. Kevin Babington from Ireland has very successfully competed the mare for the past two years. Henrik von Eckermann just recently started riding Sansibar (Stakkato Gold x Wolkenstein II). The pair were a perfect match from the beginning, as fifth at the World Cup qualifier in Stuttgart and in the Grand Prix of Doha (Global Champions Tour) prove. Sansibar, out of the line of Feuerkrone, is only nine years old. Stakkato Gold already ranks in the group of the top fifty jumping horse producers on the WBFSH world rankings. He is a producer at a great age. We hope not only to hear and see a lot of good from him and about him, but also that our Hanoverian jumper horse breeders use him a lot in their breeding programs.

” I wasn’t convinced when Stakkato Gold was crowned number one last year, and I am still not convinced. History shows us that great stallions of modern times have been great performers, and an injury prevented us seeing what Stakkato Gold could do in the arena – a young horse placing at Neumünster was his competition highlight before he was retired to the breeding barn.

Shorapur this year has had three wins, but they have all been at three-star competitions. His Grand Prix win was at Lexington, and there are no stars in the placings behind him, except perhaps Margie Engel’s Royce (Café au Lait - Petula x Grandilot). The Nations’ Cup win at Ocala was more impressive, double clear to beat an American team that included Beezie Madden and Simon (Mr. Blue - Naline x Polydox), and a fourth placed Canadian team with Yann Candel, Tiffany Foster, Ian Millar and Eric Lamaze...