In terms of prices, the PSI auction and the Holger Hetzel auction both sold showjumping horses for €1.85 million and €1.8 million, respectively. Prices, it’s rumoured, are increasing due to the lack of young horses in the marketplace. That being said, in the second half of this year, World Breeding News entered nearly 4,000 horses into the auctions database, including a great many young horses that sold for lower prices. However, the turnover for the last six months was almost €85 million, including offspring that descend from top mares and stallions. 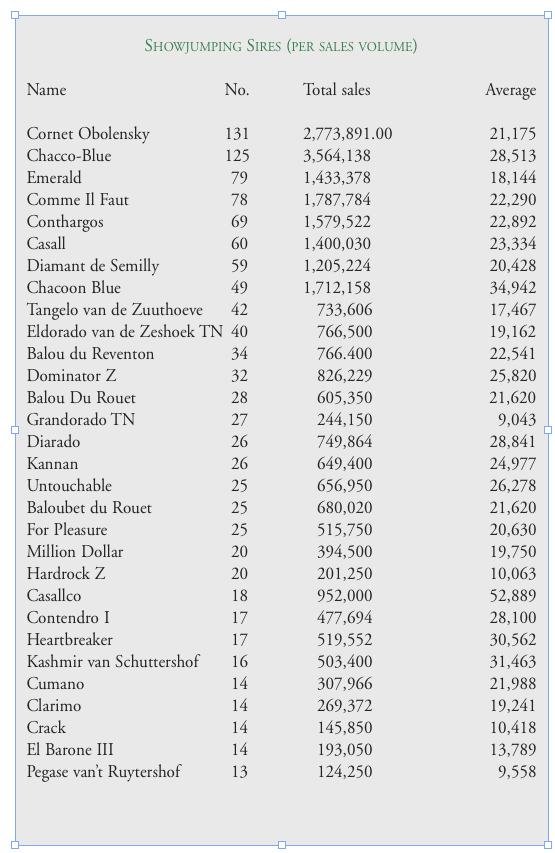 The highest price for an embryo reached €70,000, paid for a Kassander van’t Roosakker out of Panama du Seigneur (Darco), sold via Grand Prix Sales in the Netherlands. The second most expensive embryo of the year sold for €60,000 during the Trakehner approvals stallion market – by Imperiod out of a three-quarter sister to Dalera BB.
A full sister of Cornet Obolensky, Wimette van het Kluizebos (Clinton - Rabanna van Costersveld x Heart-breaker) ranked third in terms of embryo price at €55,000 – sired by Chacco-Blue.
Interestingly, the Holsteiner Verband had also planned to also organize an embryo auction, but it was a decision that wasn’t welcomed by the breeders. Out of concern that the small breeder could no longer sell their foals, the auction was cancelled and the Holsteiner Verband instead organized an info-evening webinar on the scheduled auction day on the topic of ICSI.
In countries like Belgium and the Netherlands where embryo auctions are considered ‘normal’ and the lots are being sold worldwide, it appears that insurance companies who had previously been insuring embryos, including frozen embryos, are no longer offering this option, so it will be interesting to look more closely at how this may or may not impact the market in the future. 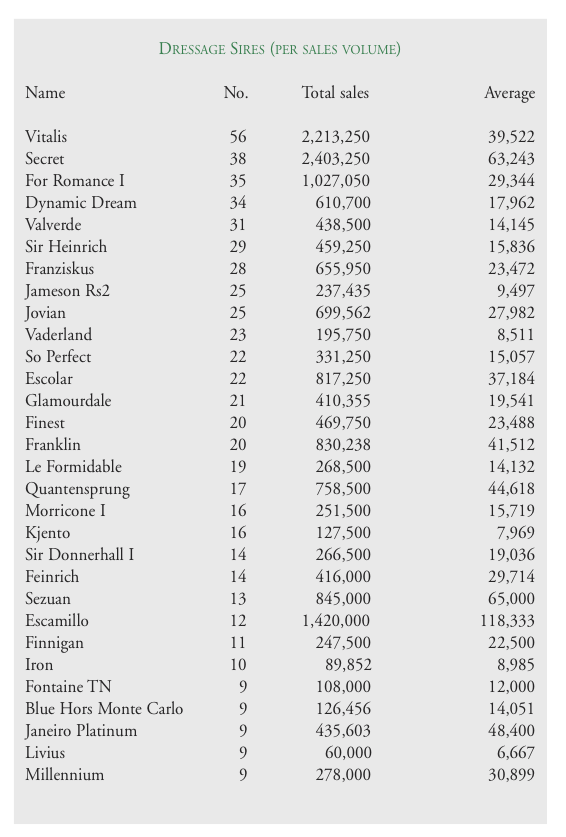 There are some interesting finds in the auctions database this year: Chacco-Blue sold 125 offspring – the biggest majority being frozen embryos and implants. This total lot amounted to sales of €3,564,138 (average €28,513). The most represented auction stallion is, however, Cornet Obolensky with 131 offspring, although his total sales figure is substantially lower at €2,773,891 (average €21,174).
Seventeen out of the fifty-four (just under 32%) of the most expensive foals and embryos of the last six months are by Chacco-Blue, representing this sire’s continuing popularity. However, like last year, Cornet Obolensky and Diamant de Semilly offspring are also being well sold, and the latter’s sons, Diarado (Roxette I x Corrado I), Dominator Z (Cephale 2000 x Cassini I) and Emerald (Carthina Z x Carthago) are also now stepping up to the plate. Demand for Comme il faut (Cornet Obolensky) offspring also continues... To read the complete article you need to be a subscriber