As the World Breeding Federation for Sport Horses (WBFSH) studbook rankings titles race warms up, the latest results show the Irish Sport Horse studbook has regained its customary position at the top of the eventing leaderboard. These early WBFSH eventing rankings are often a curtain-raiser to the main feature as the eventing season in the northern hemisphere gets into full swing.

And with an Irish-bred ‘two-for-two’ result at Kentucky and Badminton, expect the tricolour lead to extend in the next rankings. However, as last year’s title race showed, when the KWPN overtook the ISH, this current lead cannot be taken for granted. Cooley Master Class lies in individual 24th place after his Kentucky win, behind the top two Irish-breds Fernhill By Night and Woodstock Bennett. Both of these US-based horses were campaigned on the American eventing circuit in Florida and Georgia over the winter season.
Expect to see that game mare Vanir Kamira (Camiro de Haar Z - Fair Caledonian, by Dixi xx, bred by Kathryn Jackson) join Cooley Master Class, the first horse to win eventing’s new five-star event, in the Irish group after her Badminton win is added to the May results. Similarly, the 11-year-old Brookpark Vikenti is another set to jump in the next rankings, following his recent Chatsworth win. This exciting prospect was bought by the Japan Racing Association in the run-up to their home ground Tokyo Olympics. 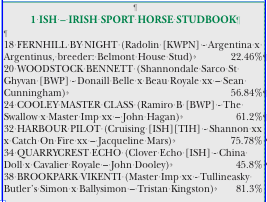 Only three times in the history of the WBFSH rankings has the Irish studbook lost this title (2010, 2011 and 2018) to its Hanoverian, Selle Français and KWPN counterparts and two of those studbooks are lying just being the current leader. And, While Ireland and France have been noted for breeding event horses for generations, the KWPN studbook is a relatively new force. Ireland with its mild climate, rich limestone land and the magic hybrid cross of Thoroughbreds on light draught mares produced tough, sound horses with great brains. Frequently hunted as youngsters, to develop their famous ‘fifth’ leg, Irish-breds excelled in eventing. Similarly, France with its own heritage of Thoroughbred and Anglo-Arab bloodlines produced similar in-demand types, particularly in the era of European and Olympic medal winner, Nicholas Touziant, the first Frenchman to win Badminton (2008). Opgun Louvo (Shogun II - Vanilla Du Tertre x J’T’Adore, bred by Yves Berlioz) is a classic example of the modern event horse and another to showcase Selle Français bloodlines.

However, the move to short format eventing – Badminton, for example, had dropped the roads and steeplechase element of cross-country day by 2006 – signalled the advent of Warmblood types, with their good movement and jump. It was also a perfect marketing opportunity for the KWPN and German studbooks against the old guard. Until Michael Jung! His best results have been on horses with around 75% Thoroughbred blood, often with sires, such as Heraldik xx and Stan The Man xx (completely under-used in Ireland before the stallion’s export to Marbach). Thoroughbred percentages have become the new breed code for five-star eventers. And it is important to bear in mind, as pointed out by Joachim and Michael Jung, that a high percentage of Thoroughbred blood is really only required for the upper echelons of the sport...To read the complete article you need to be a subscriberCLICK HERE TO SUBSCRIBE TO BREEDING NEWS