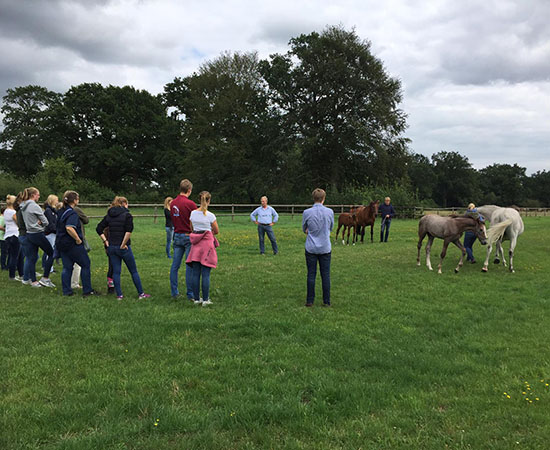 A couple of months ago, well-known French rider and breeder Xaxier Leredde advised that new breeders should have the courage to call and visit proven breeders. He suggested Harm Thormählen – a top breeder for showjumping horses. A few weeks ago my young breeders’ club in Holstein issued an invitation, saying that two regions would come together in order to organize a tour to four very interesting breeders.

This was exactly what I was looking for! On this list were the Boley family, Reinhold Marks and Jos Muffels, Harm Thormählen, and Hobe Bernard. This was a brilliant introduction and one that I hope will be continued.
Tine Rickers is one of the initiative organizers, and explains: “Many years ago, we Steinburger young breeders organized a once-a-year once a year a foal tour to various farms, but this was at some point discontinued as there were too few participants. For many years now, the Pinneberg young breeders have been organizing a great foal-watch every summer, followed by a barbecue on the farm of the Lüneburg family, which was always very well attended. The Steinburger group was always invited, but rarely able to attend due to the distance. This year, we wanted to do something together again, so we came up with the idea to visit not only a farm in one of the two regions, but to organize a proper tour of both regions. So, as a young breeder, we not only wanted to have the opportunity to see many different foals, but above all to learn something about the breeding history and the ambitions of the breeding families. We can say that this plan worked.
“With almost 30 people we drove around and were warmly welcomed at all fthe arms. From 10-year-old girls, who were just happy to be able to stroke so many sweet foals, young breeders who are actively breeding themselves and could pick up one or two tips from the ‘oldies’, to experienced breeders who like to foal watch and chat.... Everything was represented.
“We gave the breeders their own choice as to how they would like to present their foals, and that was a good thing  because we have seen different forms of presentation at all the farms. From pasture visits, free running in riding halls, to classic in-hand presentation. We are pleased that the older and young breeders in our regions work so well together. If we ask the breeders if we are allowed to watch or practice, we are always welcome, and if we are called upon to help at a show, to plait the mares and foals or load mares and foals, we are always happy to assist the breeders. Certainly next year we will again organize a tour to which all young and old breeders will be cordially invited.
”

This very special day became a history lesson and a tribute to Stamm 6879, the motherline that has produced so many amazing horses. The day was about:
• Corrado I (Cor de la Bryere - Soleil x Capitol, bred by Eduard Struve) who jumped at 1m60 under the saddle of Franke Sloothaak, became a foundation stallion for the Holsteiner breeding, as well as the international breeding of showjumping horses;
• Aquino (Acobat II - Falerna x Corrado I, bred by Reinhold Marks) who also jumped at 1m60 with Sloothaak; and
• Chellano Z (Contender - Fayence x Cor de la Bryere, bred by Karola Boley).
While damline of Corrado I flourished in the hands of Rheder Thormählen, Harm’s father, Hobe Bernard had his biggest breeding success with Corrado I, producing stallions like Coriano, Corofino I and II, etc.
Coincidentally, Reinhold Marks had posted many photos on a door in his stable representing several generations, and even a photograph from 1934 at the Stud Siethwende with old foundations stallions. It was where he later worked with stallions that have been responsible for partly creating today’s jumping horses.

The area where Harm Thormählen, Hobe Bernard and Reinhold Marks live was once a very fertile district for breeding informational sport horses. This has changed dramatically, and many breeders have no children with either the time or inclination to continue breeding, so a whole generation is about to disappear, along with traditions that were founded many years ago...To read the complete article you need to be a subscriber