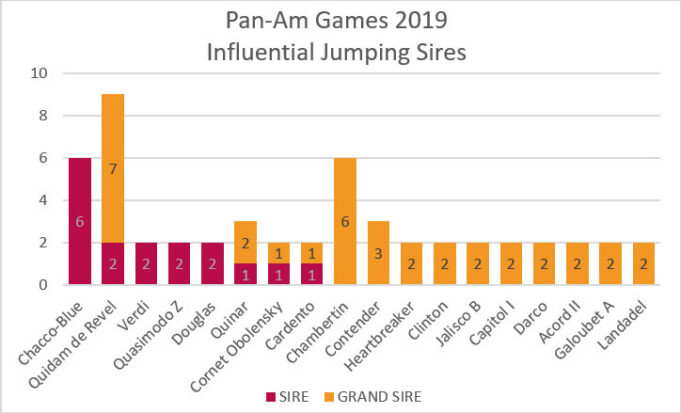 The 18th edition of the Pan-American Games 2019 recently concluded in Lima, Peru. Compared to the very hot conditions in Toronto four years earlier, everyone attending this event at the Ejército School of Equitation was well wrapped up against extremely cool temperatures, and the sun didn’t show itself once during the days of competition. While I was unable to be in attendance myself, I couldn’t resist conducting a breeding analysis to see how the top sport horses in the Americas compare to those in Europe. 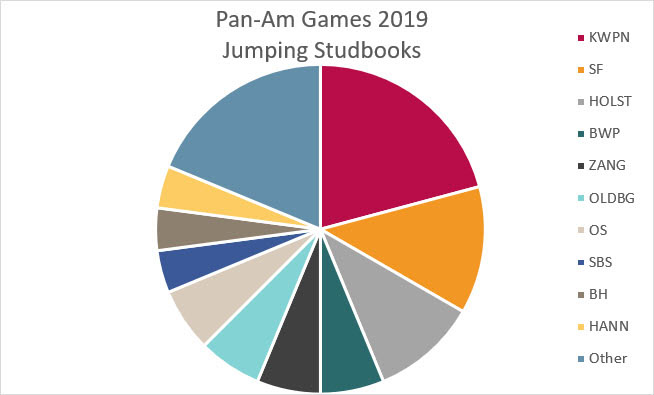 The final day of competition saw the individual gold go to Brazil’s Marlon Modolo Zanotelli and Sirene de la Motte, and silver to Argentina’s Jose Maria Larocca Jr and Finn Lente (Gaillard de la Pomme - Cherlynn Lente x Colandro). The bronze medal was decided in a four-way jump-off, with the medal eventually going to Beezie Madden and Breitling LS.
Looking at all the starters in both the teams and individual competitions, two stallions stand out as having a significant influence on the field. Current WBFSH world number one jumping sire Chacco-Blue (Chambertin - Contara x Contender) fathered a staggering six horses in the line-up: Carnaval (ds Landadel), Chacna (ds Narew xx), G&C Virko Minotais (ds Gentleman Platiere), H5 Chaganus (ds Carthago), Chacciama (ds Andiamo) and Carlchen W (ds Continue). While the mighty Quidam de Revel (Jalisco B - Dirka x Nankin) is the sire of two competitors, Quinn 33 (ds Contender) and Quicksilver VA (ds Carpaccio), and the grand sire of a massive seven of the starters. Quidam de Revel sons Verdi (ds Landgraf I) and Quasimodo Z (ds Carthago) both had two competitors apiece, while Douglas (Darco - Fiona M x Capitol I) also has two.
The most represented studbook in the jumping competition at the Games was the KWPN with 10 of the 48 competitors. This was followed by Selle Français with six, and Holstein with five. The BWP, Zangersheide, Oldenberg and OS each had three representatives, while sBs, Hanover and BH had two apiece. A total of 19 studbooks were represented in the jumping competition...

To read the complete article you need to be a subscriber