Home Health and vet If dressage horses designed themselves… 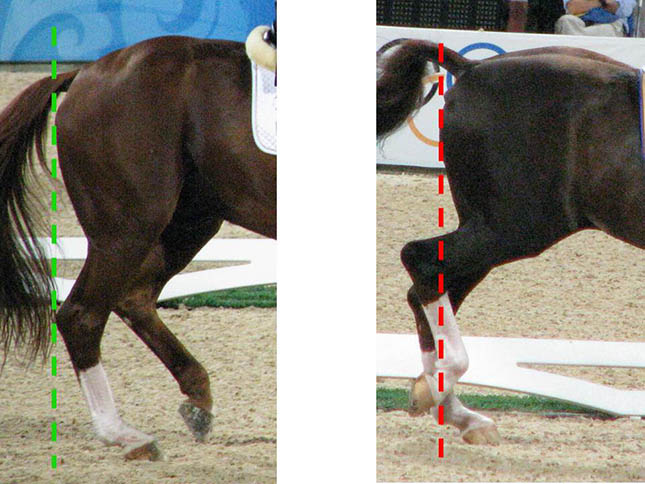 As mentioned in the first article as an introduction to this series, all horses in general, including competitive dressage horses, would want to design themselves with athleticism and soundness in mind. We will touch on many of the factors that aid those components while examining our sample horse.

Before we do that, however, it is important to note that there is one area in which the horse would likely choose different construction than some humans would: the relationship between ilium side and femur side in the hindquarters.
While humans may believe that the horse with a femur side (point of buttocks to stifle protrusion) that is shorter than the ilium side (point of hip to point of buttocks) has a more powerful looking hindquarter, the self-engineering horse would know this to be an optical illusion. In fact, the self-designing horse would avoid this structural relationship due to the way it changes the stride of the hind legs and the stress it adds to those limbs.
#1: As we see in the photos, the horse with the ilium side shorter than the femur side (marked in green) has a more stable base than the horse with the shorter femur side (marked in red). The latter’s hocks are out be-hind him, not under him, and thus have to manage more strain, which usually leads to soundness issues and repeated injecting of the hocks even though the cause of the problem is higher up the leg.

Not coincidentally, the shorter-ilium construction is the norm for upper-level dressage horses, especially those that last at that level. Would it surprise you to learn that the horse marked in green was several years older than the horse marked in red when they each retired from competition?..