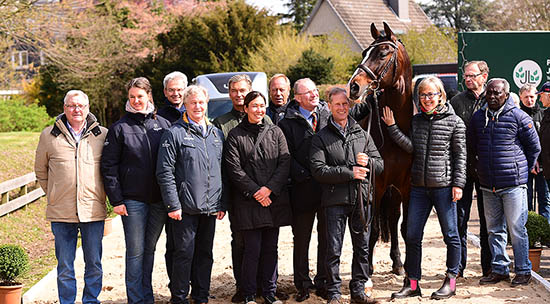 Around 400 guests gathered to Casalls 20th birthday in Elmshorn at the Holsteiner Verband Hengthaltung GmbH to recognize this exceptional stallion for his career in breeding and sport. Also included were the people who had accompanied Casall's life from the very beginning.

Guests, naturally, included Casall’s breeder Wilfried Thomann from Drelsdorf, as well as  Dieter ‘Fiede’ Mehrens and Reimer Hennings who prepared him for the aprovals, his sport manager Bo Kristoffersen, rider Rolf-Göran Bengtsson (SWE), his former groom Celia Rijntjes, and Christine Broda, who looks after the Caretino son today. Norbert Boley, managing director of Holsteiner Verband Hengsthaltungs GmbH said: “Casall has brought good luck to the Holsteiner Verband and its breeders. We were lucky that the Holsteiner Verband could buy the stallion before his approval, and we were lucky that he started his great career under the saddle of Rolf-Göran Bengtsson”.
It was a remarkable career that led the stallion and his Swedish rider to great success and made him the most profitable Holsteiner sport horse. The Swedish-Holstein pair won team bronze at the 2013 European championships in Herning, and fourth place individually at the 2014 World Equestrian Games in Caen, France. But the pair’s speciality was the 39 Global Champions Tour events in which they competed. In 2014, they took second place in the overall GCT standings, in 2015 they finished third, and in 2016 they not only secured victory in the final leg, the Doha Grand Prix, but also won the overall standings.
Their career grand finale came when Casall and Bengtsson secured victory in the Hamburg 2017 Global Champions Tour. It provided the most memorable occasion for everyone present as the stallion said ‘googbye’ to sport.  “The format of the Global Champions Tour was tailored perfectly to the stallion,” Bengtsson explained. “A small class on the first day and then a one day break before going into the important class.”

Casall, who presented himself to his birthday guests, like a monument in all his glory, was aware of his great personality at an early age, said Fiede Mehrens and Reimer Hennings. “He was something very special and always needed variety in his training. He even enjoyed time in the field. He needed it.”..

To read the complete article you need to be a subscriber