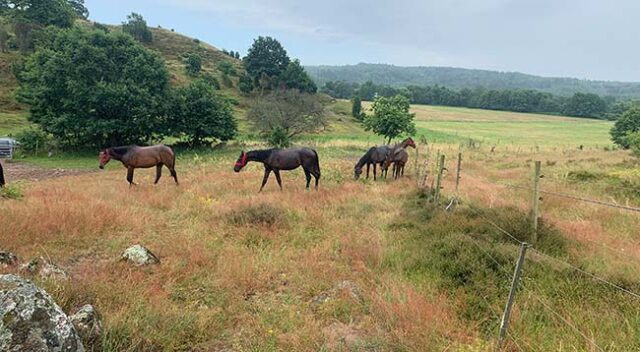 As a reference to this pilot study in Brösarp, data have been collected from two groups of horses kept in different types of husbandry in places outside Brösarp. The study size is too small to be able to make any conclusions beyond determiningwhether it makes sense to carry out larger comparative studies.

1. An Icelandic horse and a Warmblood that are kept full-time in free range on two hectares of sloping pasture with a covered resting area, outside Helsingborg in Sweden.
2. Two Warmbloods that are housed in a stall at night with access to their own grassy paddock of 0.5 hectares each during the day, outside Helsingborg in Sweden.
For the sake of comparability, data were excluded during the times when the reference horses were being exercised. From May to July, the horses in stalls had access to hay at night, whereas the free-ranging horses did not. From August to October, stalled horses also received hay in the morning and concentrated feed in the evening, in addition to the nighttime hay. The free-ranging references horses received hay in the evening starting in August, and also in the morning starting in September.
During the period from August to October, the Brösarp horses’ average daily movement distance decreased by 0.6 km compared to earlier months. This was likely due to the layout of the area during that period, where Skogshagen (where they were moved to in August) had better grazing, which may have reduced the motivation to move.
The free-ranging reference horses moved almost half as far (compared to Brösarp) during the day when there was a solution that forced them to move between, for example, water, pasture and resting area during May, June, and July. From August to October, the average daily travel distance increased by 1.7 km. During this period, grazing decreased, and they received supplemental feed both morning and evening in the covered lying area. This meant that they had to walk extra distances between the pasture and the feeding area.
The stalled reference horses, with access to a grassy paddock during daytime hours, travelled about a fourth as much every day compared to the pilot study horses in Brösarp averaging about 2 km per day from May to July. From August to October, they were provided a different paddock of about 0.5 ha with less forage.
In this comparison with the reference horses, it’s worth keeping in mind that there is probably an incredible difference in effort between moving up and down the steep slopes in Brösarp, and moving on the relatively flat surfaces where the reference horses were maintained. In order for the reference horses to reach the same activity level as Brösarp’s horses, approximately 1.5 hours of exercise in steep hilly terrain, in all gaits, would be required. From August to October, 45 minutes of such exercise would be required to correspond to the Brösarp horses.

Don’t spend money based on poor information and research!