We have waited a long time for a dressage stallion who was not only an international dressage star himself, but also the sire of great progeny - in particular stallion sons. There was Donnerhall, and his son De Niro, stallions and stallion makers as well as top competitors, and now Zack is certainly putting his hoof up to claim his share of the glory....

To tell the truth, Zack has been a better competitor than either of the two ‘Ds’. Fourth in the 2019 World Cup final in Göteborg, 10th individually at WEG in Tryon, winner of the Herning World Cup Qualifier with an 83-plus score, and with top placings in Amsterdam, Neumünster, Paris, and Aachen in 2018. Last year, he won the Grand Prix and the Freestyle at Falsterbo, and was second in the Grand Prix and won the Freestyle in ’s-Hertogenbosch’. Since then he has had a quiet show career with the focus on the upcoming Tokyo Olympic Games.
That's pretty impressive, but he has also been a top sire in his short career and has already produced 38 licensed stallions, including the Danish pair of Zonic and Sezuan.
Bred by B. Wilschut in the Netherlands, when Zack won the stallion licensing at the KWPN show in 2007, Arie Harmoen was the head of the stallion commission at the time: "We made Zack the champion stallion at the KWPN stallion show when I was the head of the licensing committee, and now in breeding he is a great influence, but as a young horse he was not winning all the young horse classes. Now he is Grand Prix and he brings good offspring."

Q What impressed you about Zack at the Licensing?
"He was medium size, but he had a fantastic hind leg use, and when he starts moving, he is always with the shoulders coming up. He was not extreme, when I gave the explanation after the championships, I said that he was an example of a functional mover not a spectacular mover. Now I think the breeders are looking more to functional movement.” 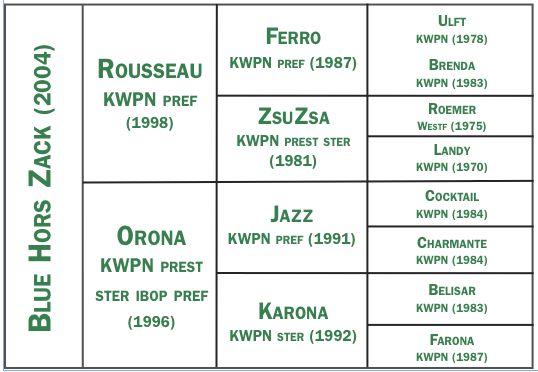 Q Are you sad that the Netherlands lost Zack when he was sold at the licensing auction to Denmark?
We have a lot of his offspring of course. We found Lennox, a good young stallion last year from the full sister of Zack.”
Dutch journalist, Jenneke Smit interviewed Zack's breeder, Bas Wilschut, after Lennox starred at the stallion show, and found that the breeder was a little overwhelmed at being thrust into the breeding limelight: “That Zack became the champion at the KWPN Stallion Show in 2007 was a huge surprise for us, and since then we’ve really invested in this damline to get more sport results, and to participate in the young horse competitions like the Pavo Cup with our mares. Lennox is the first stallion that we took to the stallion selection ourselves and it went very well. It was inevitable that Le Formidable would become champion, and I hoped that Lennox would not finish last in the championship ring. That he eventually was placed second was great to experience. His dam is in foal to Glock’s Toto Jr. and we have a two-year-old Desperado son out of her. Out of this damline we also have young stallions by Franklin and Schwarzgold. The Franklin we have together with Joop van Uytert and hopefully there is more success for us to come. It all started with Zack and he has meant a lot for us.”
Zack combines the blood of the two most influential Dutch stallions of modern times, Ferro and Jazz. He is by the Ferro son, Rousseau out of the Jazz daughter, Orona. Rousseau has had a spectacular career. He was purchased for the American stud, Hilltop Farm with the highest bid at the first annual KWPN sale – 300,000 guilders – and later sold on to Harmony Sporthorses. He easily passed his performance test with an overall 8.00 for dressage ability. He was Dutch national champion as a four-year-old, and reserve champion the following year.
Rousseau represented the Netherlands at the 2003 World Breeding Championship for Young Horses (WBCYH) in Verden, where he was second. He was immediately licensed in Hannover, Oldenburg and Westfalia... To read the complete article you need to be a subscriber