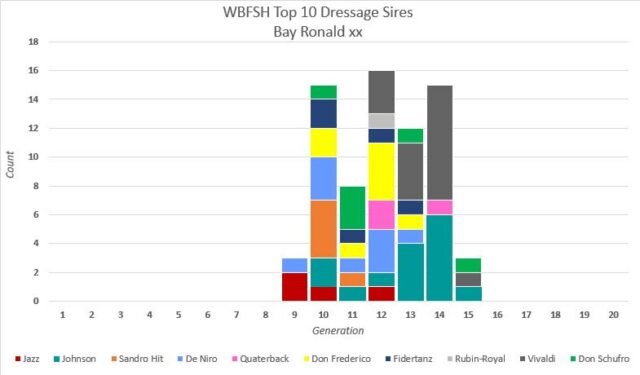 Precipitation was born in 1933 and died in 1957, Bay Ronald was born in 1893 and died in 1907, and yet these two stallions are still influential today in the world of sport horses, and it seems their influence is getting stronger as the two lines become more and more entwined...

Almost anyone who has even the faintest knowledge of jumping bloodlines knows the names Precipitation and Bay Ronald, but what is perhaps a little more surprising is the way these two have shaped modern dressage breeding in tandem; and what started out as a survey of two separate stallion lines became much more interesting in the process of researching the story.
Precipitation has had an enormous influence on dressage breeding mainly through his son, the French Thoroughbred, Furioso. Furioso's son Furioso II is the most influential stallion in modern sport horse breeding full stop, but let's not forget Furioso II's full-brother, Mexico, who stayed in France where he sired, Le Mexico who went to the Netherlands where his greatest influence has been in the dressage arena: Ferro, Negro, Rhodium, Rousseau, Blue Hors Zack and Ampère.
Why is Furioso II the most influential stallion of them all? In jumping, think, For Pleasure, Voltaire (sire of Concorde and Kannan), in dressage, Purioso, Cocktail, Jazz, Florestan, Fidermark, Florencio, Fidertanz, Foundation...
One of the most popular dressage sires in Germany Escolar, carries the blood of both Precipitation and Bay Ronald and this is a pattern we will observe again and again.
Escolar is by Estobar NRW, whose dam Florence is by Ferragamo, a grandson of Furioso II out of Florabelle, by Florestan, another grandson. There is more Furioso II on Escolar's dam, Firah Dinah L by Fürst Piccolo by Fidermark by Florestan. To underscore the dialectic of the two Thoroughbred foundation sires, Firah Dinah L's dam, Samira is by Sion, who carries three crosses of our other hero, Bay Ronald, one cross of Furioso xx himself, and there is even a grand-daughter of Precipitation, that does not come through Furioso xx.
When Gemma checked Foundation's pedigree back 16 generations she found that Bay Ronald appeared 40 times, and Precipitation twice.
The English Thoroughbred, Precipitation was the winner of seven races out of 10 starts. According to Thoroughbred Breeding of the World, edited by Rainer L. Ahnert: “He then won many long-distance races against the best in the land, crowning his distinguished career with a triumph in the Gold Cup at Ascot.”
No doubt the most important son of Precipitation in the breeding of performance horses, has been Furioso. Unlike his sire, Furioso was a failure on the track – zero wins in 21 starts – but became a fabulous sire of jumping horses in France, with his son, Lutteur B, winning the showjumping individual gold medal at the Tokyo 1964 Olympic Games. As we will see, the influence of Furioso is still strong in Germany and Holland and, if anything, getting stronger.
It was in Germany that the Furioso son, Furioso II would establish a dynasty that continues to dominate in showjumping and dressage to this day..

Furioso II was out of the great Selle Francais mare, Dame de Renville, who produced a series of wonderful horses when mated with Furioso. The first of these was Mexico, who sired 20 approved sons, 20 dams of stallions, and famous international showjumping horses, including Laeken, Jexico de Parc and Heur de Bratand, while standing at the French National Stud of Le Pin. We have already noted the influence of his son, Le Mexico in the Netherlands... To read the complete article you need to be a subscriber