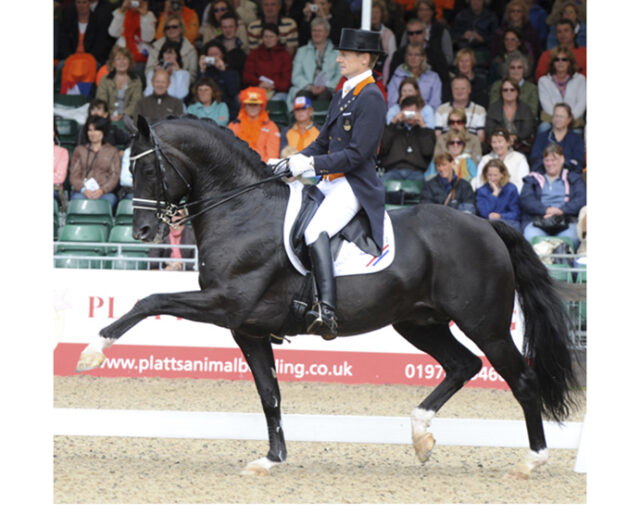 Totilas, the black dressage stallion who became the biggest sensation in global equestrian sport has passed away at the age of 20. Bred by Jan Schuil and Anna Vissa, a severe colic attack has ended the life of one of the most beautiful, memorable, celebrated, expensive, and probably also the most discussed dressage horse in the world.

Totilas had a short career as a young horse, but attracted great attention under the saddle of Edward Gal. After amazing the world in 2009 at the European championships in Windsor, Edward Gal rode Totilas to triple gold at the 2010 World Equestrian Games in Lexington, KY. At the same time, his owners, Kees and Tosca Visser agreed the sale of Totilas to Paul Schockemöhle for an amount that was never confirmed, but exceeded €10 million – the highest amount ever paid for a dressage horse.

A new rider was quickly found for Totilas when Schockemöhle sold the sporting rights to Ann Kathrinn Linsenhoff, stepmother of Matthias Rath. The best season they shared was their first, in 2011, when they represented Germany at the European championships in Rotterdam. However, no Olympic glory followed for the pair in London 2012 as injuries were sustained that kept the pair out of competition.

In 2015 luck appeared to be on their side once again, when the partnership competed in the German team at the Europeans in Aachen. However, Totilas was taken out of competition after the first Grand Prix test, and Germany finished with team bronze, beaten by a golden Dutch team that included Edward Gal. Being out of competition happened to be for the rest of his life.

The last time Totilas appeared in public was in the hand of Matthias Rath during a special celebration at the KWPN Stallion show in ‘s-Hertogenbosch February 2019. Totilas was presented together with his sons Total US (out of Sondra by Donnerhall, bred by Paul Schockemöhle, WFFS) shown by Edward Gal, and Toto Jr (out of Desperada II by Desperados, breeder Judith and Sönke Schmidt) ridden by Hans Peter Minderhoud.

"Totilas had it all: talent, appearance, movements and an amazing eagerness to work”, his former rider Edward Gal lately said in an interview. Today he added: “My heart is broken as Totilas is now a star in heaven. Totilas will always be in my heart. I sincerely offer my condolences to Matthias Rath and his family. In the end we both have been the lucky people to have known Totilas from inside out and to work with this amazing stallion.”

Matthias Rath said Totilas lived a healthy and happy life in Kronberg till the unexpected end. “Twenty years of age is far too early”, he added. He explained that Totilas always showed his eagerness just to walk under saddle, or to do some more with canter work and te piaffe, mostly with co-owner Ann Kathrinn Linenhoff.

Rath ended by saying: "There will only ever be one Totilas."

Claartje van Andel will profile the competition and breeding career of Totilas in the January issue of World Breeding News.