Home News The ups and downs of dressage 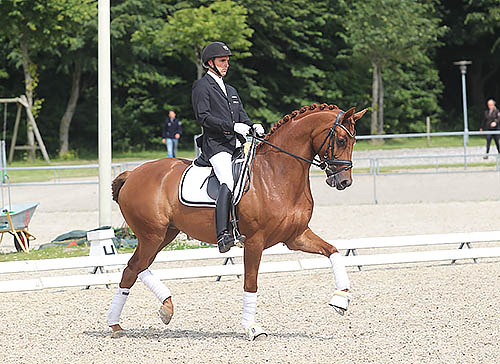 Analysis by Christopher Hector: The World Young Dressage Horse Championships were very much a Janus-faced affair; the five-year-old class demonstrated all the worst that can happen in young-horse judging, while the six-year-old class, was a thorough delight for spectators… and horses. When I started trying to make sense of Warmblood breeding, the leading studbooks were still proclaiming the aim of producing an all-round horse.

That’s like ancient history now, with specialist dressage and jumping streams well in place, and a specialist event- ing stream emerging. Given that the market for young horses is highly lucrative, and that the process of foal-to-competition-winner is so much quicker, why not a young horse stream?

Certainly when I look at the preliminar y lists for the shows on this trip, the World Breeding Championships for Young Horses (WBCYH), the Bundeschampionate, and the European Championships, it is fairly apparent that the stallions that are siring the young horse starters, were in the main, young horse stars themselves, and in the vast majority of cases, didn’t go on to ‘The Big Sport’. The successful stallions in producing horses for the Euro Champs were them- selves Grand Prix horses.

In his paper to the 2014 WBFSH seminar in São Paulo, Klaus Miesner (Ger- man FN breeding expert and a board member of the WBFSH), seemed to prove the opposite. He found that of the finalists that com- peted at the WBCYH in Ver- den, 42 percent went on to higher sport, with 44 per- cent going on to Intermedi- aire/Prix St Georges, 19 percent to Grand Prix, 15 percent to CDI-W, and six percent to Olympic Games and WEGs, which would seem to disprove my thesis that we are seeing an emer- gence of a young horse specialist stream. But it is a somewhat different story when we look at his list of the 14 ex-finalists that were in the top 50 horses on FEI dressage standings for 2014.
Of those 14 young horse stars that went on to Grand Prix glory, we find that 10 were by Grand Prix performers – Gribaldi, with two, Donnerhall, Jazz, Solos Carex, De Niro, Come Back II, Silvano, Caprimond and Lancet. If, as it appears, more and more of the young horse finalists are by horses that did not make it to Grand Prix, then perhaps these figures will look somewhat different in future years.