By Sally Reid
Photography: See List at the end of this article

Who can doubt that New Zealand has a world-renowned sporting team known as the All Blacks. I’m talking about rugby, of course, along with their spine-tingling ‘haka’ – the ceremonial dance in Maori culture – performed before every game, traditionally to try and intimidate their opponents.

They’re a team of 15, and they’re right at home on a grassy field. Their name, which comes from the all-black uniform they wear, has been with them since 1905.
However, another team of 15, also ‘all black’ and also at home in grassy fields, has built up over the years of sport horse breeding here in New Zealand. Not all of them began life in this country, and one of them (the second on the list) is an ‘almost black’, but decidedly worthy of inclusion. To celebrate the 300th issue of World Breeding News, let’s take a look at them: here’s the line-up, strictly in order of year of birth – not in order of merit. 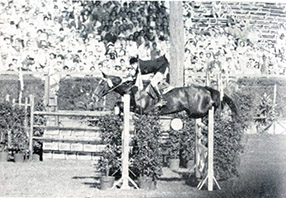 This Clydesdale-cross gelding of unkown pedigree absolutely typifies NZ jumping horses of his era – and there are still plenty of them in successful action here.
He was bred by Mr W. Pittam at Tokonui Psychiatric Hospital farm, and became New Zealand’s first Olympic equine, ridden at the 1960 Games in Rome by Hawke’s Bay shepherd, Adrian White. The pair finished 26th. Telebrae was later sold to Pat Smythe with whom he had a super Puissance win in London, and later still to Dr. Lalla Novo of Italy. He continued jumping successfully, despite being blind in one eye – a fact that no one knew when he competed at the Rome Olympics. 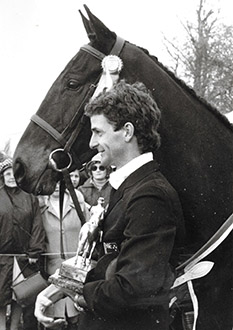 Strictly speaking this gelding was very dark brown: an ‘almost-black’. He was born on a hilly New Zealand sheep station. Like Telebrae, he does not have a recorded pedigree, but he did appear to have some Thorough-bred blood. At the age of 10, in 1980, he carried a then unheard-of Mark Todd to victory at Badminton, to the astonishment of the eventing world (and Toddy himself). Theirs was one of only three clear rounds inside the time over a very tough course – which just 29 of the 68 starters managed to complete. Their groom for the event was Andrew Nicholson, also unknown in those days: He and Todd met on the horse transport flight from NZ.
Southern Comfort III was later sold to USA rider Torrance Watkins, who rode him to team bronze at the World Eventing Championships in 1982... To read the complete article you need to be a subscriber