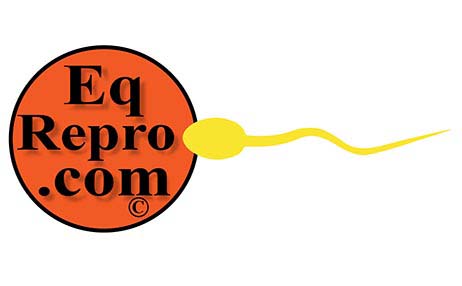 By Jos Mottershead and Kathy St. Martin
Photography: Attributed at the end of this article

Your mare is at approximately 250 days of pregnancy and one morning you notice significant mammary development. Upon closer inspection you find that milk is present and can be expelled from the udder. What to do?

Placentitis is defined as “inflammation of the placenta”, the portion primarily being affected being the allantochorion. The condition may occur in between 3% and 7% of equine pregnancies and 90% of the causative infections are due to bacteria entering the vagina, travelling up to the cervix and penetrating the cervical barrier.[1] A variety of occurrences are then possible, including separation of the placenta from the uterine lining, reduction of oxygen and nutrient transfer to the fetus, and fetal death in utero or abortion of a live, premature and/or compromised fetus.

External Signs: While some mares normally develop a filled udder as much as a month before foaling, early development is commonly a sign of an issue with the pregnancy. In this latter problematical situation, if the cause is left untreated, typically an abortion will result. The premature mammary development in itself is merely an indicator of there being an issue, and may occur as a result of a variety of causes such as the mare being about to abort twins, or – most commonly – placentitis. There is no doubt that early mammary development is therefore a cause for concern and that it is necessary to determine and treat (if possible) the underlying cause.
There is a difficulty in identifying what is “premature filling” of the udder. Sometimes – such as at cited 250 days – there is no difficulty recognising the prematurity, but as the mare gets closer to her anticipated range of normal foaling dates – 320-370 days – it can become increasingly difficult to definitively identify filling as premature. Some mares may develop udder filling earlier, others closer to foaling. Maiden mares are particularly notorious for little or no development until in some cases, after foaling. It is clear therefore that “individual circumstances” are the order of the day and if the mare has foaled before a history of previous development may be a valuable indicator. As a very rough general rule of thumb, development prior to 300 days of gestation may be considered suspicious, but again it must be reinforced that there is a strong individual mare influence.
If exudate is visible either on the vulval region or pooled in the vagina, a swab sample may be taken and cultured with a view to gaining an impression of any pathogen involved. The result could lead to determination of a suitable antibiotic treatment protocol, but it must be remembered that the vagina is commonly inhabited by organisms which may or may not be associated with the placentitis. That factor could result in a return of an inaccurate diagnosis of the causative agent, although inc-lusion of treatment of any identified likely organisms in a treatment protocol is more likely to prove beneficial than unnecessary.

The initial step is going to be rectal palpation and ultrasound. The palpation is valuable for determining if the fetus is indeed still alive – one would not want to attempt to maintain a deceased fetus in utero – although in rare instances it may also be able to determine the presence of twins. Do bear in mind that this latter aspect is not going to be easy, and unless something definitive is clearly palpable such as two adjacent heads, the result will often be inconclusive as far as determining twin presence (or absence). It should also be borne in mind that the fetus during late pregnancy may have periods of dormancy extending to as much as an hour in duration, although usually less. It may be necessary to poke or prod the fetus during a prolonged – up to 15 continuous minutes – period of rectal examination in an attempt to elicit response. A repeat palpation may also be required later to definitively rule out fetal activity before presuming it to be dead if no movement is felt during the initial palpation. If a fetus is found to be lacking tone – (“limp”) upon palpation – a compromised foal should be anticipated. Doppler ultrasound may also be used to evaluate fetal heartbeat if within reach of the ultrasonographer... To read the complete article you need to be a subscriber

Managing reproductive emergencies in the field