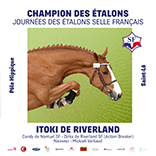 A total of 74 stallions were evaluated during Friday, in three categories: free jumping, model, and paces.

Today, no fewer than 53 stallions set foot on the track of the CPE manege, divided into two divisions: The Masters l'Eperon, which included an exhibition event for four-year-olds (without classification), as well as a 5-year-old and a 6-year-old event. A 'Performers' event also took place, one for seven- and eight-year-olds, and another for those age nine and over.