The Irish Sport Horse (ISH) has led the World Breeding Federation studbook rankings in eventing for 22 of the 25 years that the rankings have been in operation. The use of the Thoroughbred (TB) horse crossed with our core breeds (Irish Draught, Connemara and Thoroughbred) has been fundamental to this success up to the mid 1980s. The continental cross, especially the first cross (i.e. continental x ISH [TIH] mares) has increased since the mid 1980’s.

However, increasing use of conti-nental crosses, has resulted in a decreased use of Thoroughbred blood. In the late eighties, 68% of all Irish mares visited TB stallions. In 2018, only 13.4% of mares visited a TB stallion, and only 6% of mares bred from in the Irish Sport Horse population were Thoroughbred.
For the breeder whose objective is to produce an international showjumper, the focus is clearly on performance dam lines. No longer is it rewarding to breed a mare with no performance credentials in the first three generations of her dam line to a top performance approved stallion and receive a consistent economic return from her progeny. Mares that have jumped a minimum of 1m45 to 1m50 themselves, or families where the first, second or third dams have bred several performance competition horses, are the commercial mares for the international showjumping market. A number of Irish breeders are lucky enough to have some of the country’s best performance bloodlines, while others have invested in recent years by buying in strong performance dam lines from abroad.
However, even for the showjumping market, we need to be mindful of ‘blood’. The top-level Grand Prix and Global Champions Tour horses are blood horses who are required to be quick, gallop, and jump to win classes. These horses also need to be able to recover quickly, and cope with significant travel, including by air, during their international careers. Nowadays, the ‘blood’ for international showjumpers rarely comes directly from a Thoroughbred stallion or mare. The sharpness and blood are maintained in the pedigree by the use of refining animals, where the TB in is the second, third, fourth, or fifth generation of the pedigrees. For example, Zinius (KWPN) the world’s top-ranked showjumping horse in 2018, is 54.49% TB. Yet he has no direct TB in the pedigree until Abgar in the fifth generation, then in the sixth generation he has Furioso three times, and another nine Thoroughbreds recorded in the sixth generation pedigree. 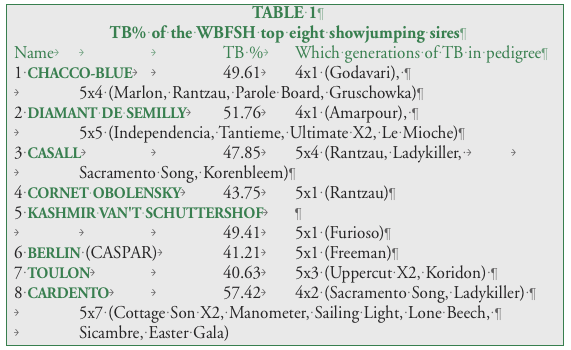 Table 1 shows percentage of TB blood for the top eight WBFSH sires in 2018. As you can see, Cardento has the highest TB% at 57.42%, and has proven to cross very well with Irish mares. By comparison the top eight WBFSH eventing sires include two Thoroughbreds, Heraldik and Master Imp, as well as the 81% Thoroughbred stallion, Jaguar Mail...