Home Health and vet Male or female? What would you choose? 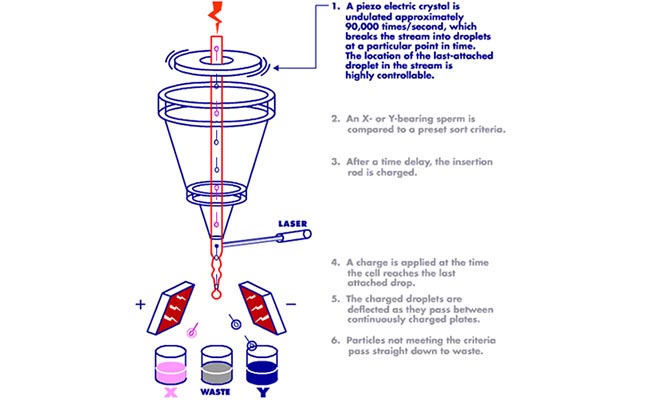 Modern reproductive techniques have gone through major developments over the past 50 years. Apart from the English Thoroughbred studbook, which only permits natural covering internationally for its mares, the authorities representing other race horses (Arabians, Trotters...) or sport horses (the Olympic disciplines), have opened all or part of their studbooks to artificial inseminationor for the transportation of the seed, to embryo transfer and, for some, flushing of oocytes, in vitro fertilization, or even cloning.

For stallions, the major advantage of these various techniques is to separate the moment and/or the place of semen collection and/or the place of insemination of the mare. A stallion can thus produce semen for freezing during the winter months, for shipping all around the world the following Spring.
With regard to females, embryo transfer allows a competition mare to simultaneously pursue both a sporting and a breeding career, or for a particular broodmare to produce several foals in one season, according to market expectations and the most fashionable pedigrees.
In brief, everything is more or less controlled according to the desires of the breeders/investors about which we know, as bankers, that there is a holy horror of uncertainties and risks. Yes, everything is finally predictable in sport horse breeding, or almost… With the exception of the sex of a future foal.

The end of the game of chance!

Until now, it has been necessary to wait for a transrectal ultrasound at the beginning of the third month of gestation and a transabdominal ultrasound on the fifth month in order to know the sex of the foal. It’s information that could be conservatively considered ‘quite interesting’, for both the breeder and the owners of the mare, and also for a potential buyer who wishes to invest in specific genetics, provided that the unborn foal is, according to his/her objectives, a male or a female. This information is only ‘quite interesting’ because, unfortunately, at this point, it is too late to turn back.
The first company to work on this topicject in Europe, Equitechnic, based in Corbon, Calvados, is now in a position to offer the ‘decision makers’, the career of a producer, the opportunity to choose, prior to insemination, the future sex of a product.
A reminder: To allow a breeder to choose the sex of a future foal, it is necessary to return to the moment of conception – the insemination, therefore, of the mare. As with all mammals, fetal sex is determined by the sexual chromosome that is carried by the sperm at the time of fertilization. If the spermatozoa carries the ‘Y’ chromosome, the fertilized oocyte will give birth to a male. If the spermatozoa carries the ‘X’ chromosome, the mare will give birth to a filly. Considering the standard number of sperm collected at each harvest (three to seven billion, on average), or the number of sperm contained in single straw (50 to 500 million), it will be born, with no interference in the process, statistically, from both males and females.
These global statistics are not predictable! Breeders worthy to be called such, have known and/or experienced a mare that has produced four or five males consecutively, and vice versa. To avoid this reoccurence, the only solution is to sort the sperm in advance, before inseminating the mare. It should, of course, be understaood, that this work requires the appropriate equipment.

Having signed a partnership with Sexing Technologies –  the American specialist in sexing bovine seed – Equitechnic acquired in Autumn 2018 the first machine that allowed the testing of seed from 16 French and foreign stallions from eight different studbooks...