Despite the ongoing disruption to the national and international eventing calendars, Irish horses have shown their class at every opportunity, most recently at Land Rover Kentucky’s three-day event and at Ireland’s first home international of the year, Ballindenisk.

The 2021 Land Rover Kentucky Three-Day Event was held from April 22-25, when just under 20% of the starters were Irish-bred sport horses. All eyes were on Oliver Townend’s (GBR) dream team: Cooley Master Class (ISH) bred by John Hagan in Co. Wicklow; and Ballaghmor Class (ISH) bred by Noel Hickey in Co. Limerick.
Cooley Master Class (ISH) came as a two-time defending champion, having won the feature event in 2018 and 2019. In 2019, the 12-year-old gelding, by Ramiro B (BWP) out of The Swallow (ISH) by Master Imp xx, made history in winning the first ever CCI5*-L title at the event. His stablemate, Ballaghmor Class (ISH), a 2007 gelding by Courage II (Holst) out of Kilderry Place (ISH), finished joint top of the British Eventing horse rankings at the end of the 2019 season, having been inducted into the Eventing Riders Association (ERA) International Land Rover Burghley Horse Trials Hall of Fame.
Ahead of the final showjumping phase, both horses sat inside the top 10 on the leader board, Ballaghmor Class (ISH) in first and Cooley Master Class (ISH) in eighth. Three other Irish Sport Horses were also in contention, lying inside the top 20 after cross country (see info below). 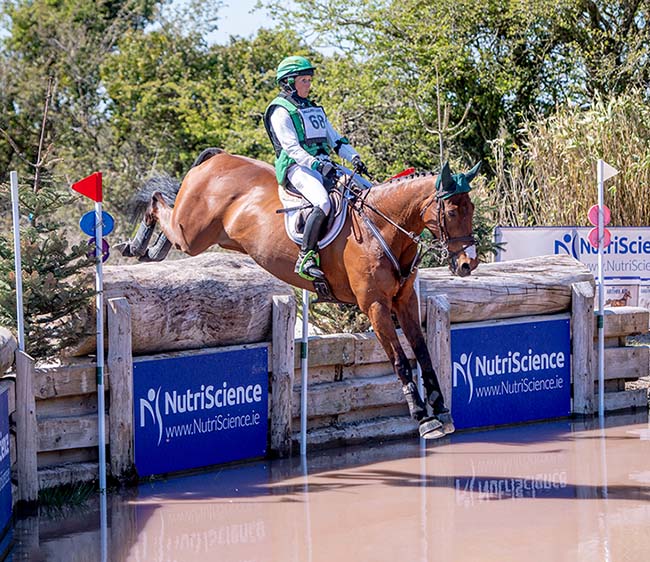 Sadly, the ever-consistent Cooley Master Class (ISH) picked up a minor injury during the cross-country which prevented him from completing the final phase, but the deserved winner was Ballaghmor Class (ISH) who produced a perfect clear showjumpingh round to complete on a score of 27.3. Grovine De Reve (ISH) gained three places after a fantastic showjumping round to gain another podium placing for an Irish Sport Horse when finishing third.
• 6th: Ridden by Jonelle Price (NZL), Grovine De Reve (ISH), a 2008 gelding by Hermes De Reve (SF) out of Erkina Jane (ISH)[TIH] by Rimilis xx, bred by Paddy and Maria Raggett from Co. Kilkenny;
• 9th: Bango/aka Bango Royale (ISH), a 2006 gelding by Garrison Royal (ISH) out of No Sale (ISH)[TIH] by Don Tristan xx, bred by James Foley from Co. Wexford and ridden by Tim Price (NZL);
• 19th: Off The Record (ISH), a 2009 gelding by VDL Arkansas (KWPN) out of Drumagoland Bay (ISH) by Ard Ohio (KWPN), bred by Peter Brady from Co. Cavan and ridden by Will Coleman (USA).

On home soil, Irish Sport Horses won five of the six classes at the first home international of the year – Ballindenisk International.
Ireland’s Michael McNally won the feature class, the NutriScience CCI4*-L, with his own Eclipto – a 2011 Irish Sport Horse by Cavalier Carnival (ISH) out of Tawna Jane (ISH), bred by Jackson Goulding from Co. Meath. Fred Scala (IRL) and Everon Vivendi (ISH), bred by B & G Campbell, finished as runners-up and Steven Smith (IRL) and Galwaybay Echo (ISH), bred by Justin Burke, finished third... To read the complete article you need to be a subscriber

RIP Breido Graf zu Rantzau: His legacy will live on