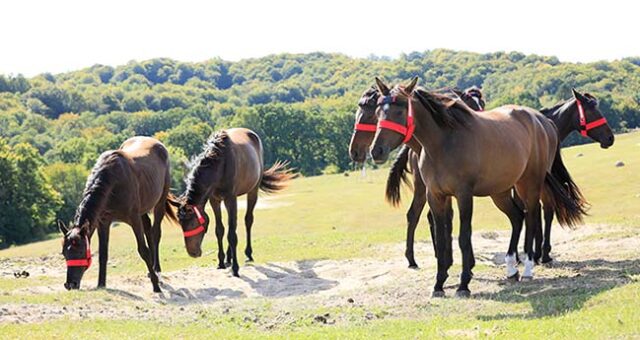 Former head of Sweden’s national studfarm and father to Olympian showjumpers Jens and Peder, Ingvar Fredricson first introduced me to the Brösarp Project in 2020, before the lockdowns of the Covid pandemic stalled so many industries. However, we are now pleased to present a series of articles that puts years of ground-breaking work into perspective.

According to Karl Forssman, one of the founders of Hoofstep, “I first met Ingvar [Fredricson] in 2017. Some time later he and Peder talked to Magnus Skulason, who kept his Icelandic horses ‘running free’, and they thought this same opportunity could also benefit Warmbloods, offering them an ideal environment in which to grow up. Then, at a horse show in Gothenburg, I introduced Ingvar and Professor Lars Roepstorff (a veterinarian at the Swedish University of Agricultural Sciences in Uppsala) to the Hoofstep technology which could provide data for yearlings. After that things moved very fast and the Brösarp Project was created.”
Hoofstep has been responsible for developing technology that would provide around-the-clock monitoring of horses, downloading app-enabled information from a digital head-collar directly to smart phones: Real-time intelligence. Since June 2016, their project has gathered the largest set of horse behaviour data available in the world today.
According to the Hoofstep website: “Our mission is to improve the health and well-being of horses by analyzing objective behavioural data in combination with advanced technology. We immediately identify any deviations that may affect the well-being of the horses. This shortens the time from injury, illness, or stress to action.” Breeding is one of the company’s targeted industry groups offering 24/7 survellance of a pregnant mare, whether she’s stabled or out at pasture.

A road-map for good health

In the WBFSH Tribune column of our December 2020 issue, Ingvar Fredricson wrote: “International jumping riders around the world search for horses with the potential to be successful in 5* Grand Prix classes. They always know the detailed pedigree and competition record of the horses they test ride. However, they do not know much about their rearing. This is astonishing as rearing is of great importance for durability in sport.
“Proven experience has shown that horses reared on large, preferably hilly ground, with diverse footing conditions, will be far more durable. Dutch researchers (René van Weeren et al.) have studied the importance of different housing regimes of foals.
They found that pasture turnout day and night during the first three years is best for the development of the musculoskeletal system (cartilage, tendons, and ligaments, muscle, and skeleton).
A dynamic remodeling of the musculoskeletal system already takes place during the first five months of a foal’s life, then successively slows down. Most interesting was that the researchers found that the shock absorbers of the limbs, the collagen of the joint cartilage, were fully developed already in the first year of the foal’s life.
They also found that foals kept in freedom on pasture became better developed than foals with less hours to move freely. The conclusion of René van Weeren and co-workers was that: “Rest is bad for foals. Watch this, because if not, you may end up with a healthy (looking) foal, but one of inferior quality.”
In the south of Sweden a group of scientists and equestrian professionals set up a rearing project at the Brösarp Farm to underline the importance of a solid and sound rearing period for young horses as the best way to start their lives as future stars of the sport.
The general aim of this project is to investigate whether Sweden’s wild, unprofitable agricultural land can be kept open by the rearing of top-quality showjumpers. Therefore, in 2019, a group of one- and two-year-old jumper fillies was released onto the hilly pastures at Brösarp in the south of the country... To read the complete article you need to be a subscriber
CLICK HERE TO SUBSCRIBE TO BREEDING NEWS

Guerdat: “Breeding, blood, sport – it all plays together.”