The sires and dams of 2019’s Puhinui three-day-event place-getters ranged from ster pref KWPN to Kaimanawa – about as dissimilar as equine backgrounds can be. And in case you’re wondering, the Kaimanawa is a wild horse found only in New Zealand, standing on average only around 14hh (142 cms)!

In true New Zealand eventing style, however, Thoroughbreds won the top two classes, although one of them was bred in Australia. Nonetheless, Thoroughbreds were in the minority among the highly placed horses, numbering just four altogether.
A New Zealand Warmblood was the winner of the two-star, while the one-star went to a beautifully bred KWPN import. Other top-placed imports included an Irish-bred ISH, another KWPN from the Netherlands, as well as a Hanoverian from Australia. The latter studbook was the most  represented from among the Warmblood breeds.

Puhinui’s young horse honour is normally awarded to the best-placed seven- or eight-year-old in the two-star CCI. However, this year’s winner is only six! She is a young Hanoverian mare, Henton Audacious (Anamour - Distancia x Distelfink), bred by Henton Lodge Hanoverians and ridden by Abigail Long, who is the joint owner with Clive Long. This lovely chestnut has already had two wins and a runner-up at one-star level, but Puhinui was her first full two-star competition where she finished 10th in the big field, with good dressage, a fast, clear cross-country, and just one unlucky showjumping rail.
It’s worth mentioning that another of Henton’s progeny, Henton Ambassador, finished fifth in this class (see separate CCI-2* report below), and DSE Henton For Glory (For Edition), was reserve young event horse at last season’s Taupo three-day event. The stud uses only licensed and performance-tested German Hanoverian sires, and mares who have been classified by the NZ Hanoverian Society. Audacious’s dam Distancia, a Grand Prix showjumper, is also the dam of Balmoral Henton (Contendro I), who was sold to Australia, competed at two-star horse trials there, and is now jumping at World Cup level.

Aces High xx (Another Warrior xx - My Fairytale xx x King Ivor xx) won the four-star CCI for Clarke Johnstone, who has had the 10-year-old Australian-bred gelding since April 2009 and has, so far, competed him only lightly. The pair had their first FEI start at Taupo in November (three-star CCI) where they finished second.
Aces High is owned by Clarke Johnstone and his parents, Rob and Jean Johnstone. He was bred in Australia, although the breeder’s name is unrecorded, and was produced to advanced level there by Madeline Wilson. His sire, Another Warrior, was a black-type winning racehorse but, unusually for racing stallions, is owned by Australian eventers Shane and Niki Rose. Another Warrior was also the sire of Shanghai Joe, Rose’s international eventer who died in a heart-breaking accident at Badminton in 2017.
Second place in the four-star went to the baby of the field, Acrobat (ES Centavos) and his owner/rider Monica Oakley. The nine-year-old New Zealand Sport Horse gelding was bred by Kate Bird, from a Thoroughbred mare whose name is unrecorded. He finished fourth in the Puhinui two-star in 2018, and was third in the four-star at Kihikihi in April 2019. This consistently good performer is seldom far from the top placings, and his score at Puhinui was just one point behind the winner’s.
Deo Volante (Tolan R - Selien prest ster pref x Mermus), an 11-year-old KWPN gelding, finished third, despite a few hi-jinks in the dressage phase with rider Clarke Johnstone, who describes the handsome dark bay as ‘highly talented, highly strung; a real character’. Deo Volente is from Merrielijn 81, Fokfamilie 183, and was bred by E.J. Tijink in the Netherlands. He was second in the National three-star championship at Taupo in May 2019, and fifth in the four-star CCI-S at the same venue last November. He is owned by Rob and Jean Johnstone, Paul Crompton and Paula Milburn, and is equally at home in the jumping ring, with a Grand Prix win at Woodhill Sands, plus a very competitive 1m30 victory. Deo Volente was 11th after dressage at Puhinui, but superb in the other two phases...To read the complete article you need to be a subscriberCLICK HERE TO SUBSCRIBE TO BREEDING NEWS 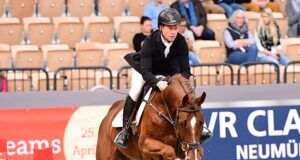