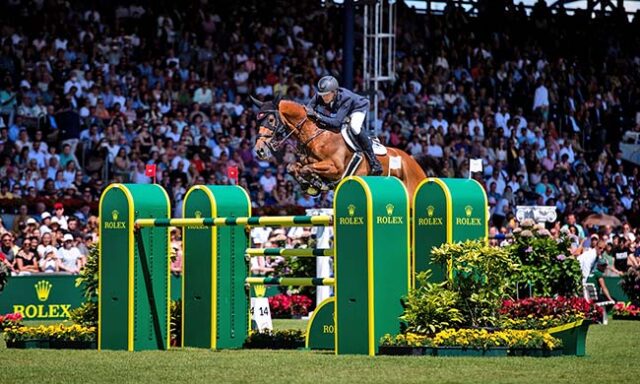 The Rolex Grand Slam Grand Prix winner in Aachen 2022 was a true home victory for Gerrit Nieberg and his top horse, the Westfalian-bred gelding Ben 431 (Sylvain/akaBalou 400 - Quipolly x Quincy Jones) Bred by Christa Mikulski, it was Ben 431’s first victory at this level, and surely one that will never be forgotten, so what is Ben’s story?

In 2010, the Ramzes Prize – awarded for special merits in horse breeding – went to Ludger Schulze-Tomberge from Senden. The full-time farmer is a long-standing member of the Westfalian Studbook board, and has already produced a number of licensing winners. In 1985, for example, the stallion Disco-Look (Disco-Star x Octavia xx) was approved, and in 2017 he was elected as an honorary member of the Westfalian association. Ludger Schulze-Tomberge recalls: “Rakete was the first mare we started this line with. She was Westfalian bred, by Radetsky out of Fliegette by Fliegensbote, born in 1962. We purchased her when she was one-and-a-half years old. Her breeder was Heinrich Riestenpadt.
“She was already for her time a very modern horse. Even today people would notice her. We crossed Rakete with the Thoroughbred stallion Octavo xx (Miralgo xx - Miss Patsy xx x Olein’s Grace xx). This stallion was standing quite close to us and we liked his type. He was an Irish Thoroughbred. This stallion had a very good hindleg and that was not always the case with Thoroughbred stallions. Octavo xx gave three state premium mares and we bred all three of them. Odessa came also out of the Octavo xx x Rakete cross, and, earned a state premium, and also made it to the final ring of the Elite Mare Show of the Westfalian Studbook.
“We then used Polydor (Pilatus - Fata Morgana x Frühlicht I) for Odessa. The mare Peppina by XYZ comes from this cross, the grandmother of Ben 431. It is important to understand that about 30 to 40 years ago there was no such thing as artificial insemination. There were in that time only a few top stallions for breeding showjumping horses, those were Pilot, Polydor, Paradox I, and also Goldlack. You could not order semen like today from Belgium or the Netherlands. All the breeding happened by natural covering. We had a very good connection with the State Stud in Warendorf and because of that we had the possibility to use Polydor. He was a very popular stallion. We used him twice for Odessa, and Peppina by XYZ had Pagend as a full sister.
“The mare Peppina was started under saddle as a three- year-old and did a mare performance test with very good results. We entered her for the Elite Mare Show where she became state premium, but she was already sold. The buyers really wanted her, because she was also very well bred, so we kept breeding with her full sister. We saw Peppina two years later competing at the German Young Horse Championships.
“The broodmares in our program are all tracing back to Rakete. We have successfully built up a branch for dressage horses and a branch for showjumping horses. The showjumping branch is strong, and Pagera is mother to the 1m50 jumping horse Baron XVIII (Balou du Rouet). This line has good movement, so I really tried to focus on that. The horses have blood, and a lot of energy. They are also very supple and elastic in their body.

Christa Mikulski is a passionate breeder, who also likes to stand her own stallions and is doing her best to let her horses have a career in sport. Her daughter Sigrid recalls about the history behind Ben 431: “My father purchased Peppina because he always wanted to have a mare by Polydor. She jumped at 1m40 under the saddle of Marcus Wenz, until she got injured and she became a broodmare. My mother crossed her with the stallion Quincy Jones, who was also owned by my mother. She loves stallions and she has a small stud where she always keeps a few stallions. She has own-bred stallions but she also buys stallions from auctions... To read the complete article you need to be a subscriber

Hanoverian Mare of the Year, and dressage stallion licensing