Always reaching higher.... More expensive! A great many auctions have consistently broken price records during the final quarter of 2018. As always, the end of the year is a special time for auctions, because with the stallions approvals, host auctions have already identified the sport horses with high-level potential – and important prices followed one another.

The top price this year was for a mare sold during the famous PSI auction, held on December 8/9 in Ankum, Germany. Stakkariealla, a six-year-old chestnut mare was sold to the United States for €2.4 million. The Stakkato daughter was the most expensive jumping horse ever sold in the 39-year history of the PSI Auction. As with much of the collection, this mare was breed at Paul Schockemöhle’s  Lewitz Stud. The Hanoverian mare has already achieved success under the saddle of rider Patrick Stühlmeyer. “I’m sure that this is one of the best horses I have ever bred,”  Schockemöhle exclaimed.
During this auction, another horse was sold for more than one million: V-Plus. Thisfour-year-old black stallion was also sold to American clients, this time for €1.2 million. “This is a stallion with extraordinary quality and exceptional character. His aura is magnified into everything and the buyers were fascinated by him,” reported Ulli Kasselmann. The Vivaldi son will be exported to the United States to Harmony Sporthorses for his new owner Leslie Malone, although the Pape Stud will soon have this jewel as part of their stallion roster.
Even thought PSI does not communicate their full results, they indicate that the dressage horses achieved a total of €7,265,000 with an average price of €290,600, and the showjumpers €9,975,000, for an average of €399,000.
But the Vivaldi son was not the price highlight for dressage horses during this final quarter. It was another product of Vivaldi who was crowned during the Hanoverian stallion market in Verden at the end of October. The two-year-old chestnut stallion (bred by Ulrike Buurman and owned by Ernst Kemper) was a co-purchase by Andreas Helgstrand and… Paul Schockemöhle. With this sale the Hannoverian Verband set a new stallion licensing auction record for Vivino (Vivaldi x Dancier), when the hammer dropped at €2,010,000. Helgstrand already held the previous licensing auction price record at €1.2 million paid for Revolution in 2015. To secure the purchase of Vivino, Helgstrand had to bid against Norwegian millionaire Kristin Andresen.
During this same auction, a premium stallion by Lord Leatherdale x Boston was knocked down for €800,000 to a trifecta of buyers: Joop van Uytert, Paul Schockemöhle, and Andreas Helgstrand. The Norwegian Kristin Andresen finally purchased Duke 56, a premium-licensed colt by Dimaggio, out of a mare by Sir Donnerhall, for whom he paid €570,000. This Dimaggio son was also owned by Ernst Kemper, who bought him from his breeder, Dieter Hilz. 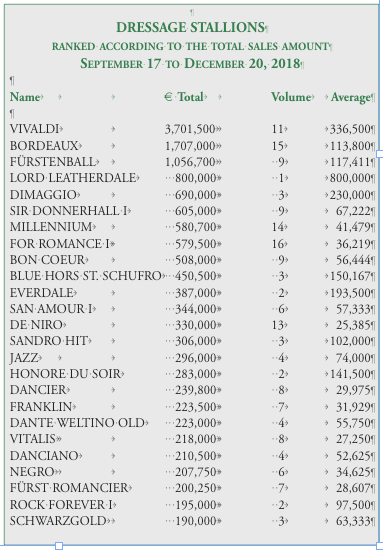 For show jumper stallion, price highlight during these Hannoverian auction was for a son of Kannan with a Stolzenberg’mare : he was sold for 150,000 € to the Irish rider Cian O'Connor. The rider is still very active on the market, he also bought in october the incredible Lady Cracotte who unfortunaly died few weeks after his sale, and also the grey mare Irenice Horta who was ridden by Lorenzo de Luca during the last WEG of Tryon.
Another German auction is becoming more and more important : the International Sport Horse Auction at the equestrian center of Holger Hetzel in Goch in Rhenheim who ended with a new price record. A five-year-old Dutch stallion, Dacantos was slammed for a bid of 950,000 €. The Dallas VDL son from a Cantos’mare, already highly successful on the occasion of his licensing in 2015 in Vechta Premium Stallion and in show jumping competitions, was hotly contested. In the end, the sponsor of the British showjumping champion Ben Maher prevailed. The second highest horse was the eight year old mare She's the One. She is a daughter of Emerald van't Ruytershof and was acquired for 500,000 euros by the Saudi-owned stud farm "Old Lodge Stud" in the UK. Overall, the 20 auctioned horses sold during the Holger Hetzel auction achieved a total turnover of 3,867,000 €, which means an average price of 193,350 €...CLICK HERE TO SUBSCRIBE TO BREEDING NEWS