East Coast Performance Horses’ annual NZ Young Horse Show in Hastings is one of the most exciting on New Zealand’s competition calendar: a real exhibition of the rapidly improving quality of locally bred jumping stock. Some of these babies are destined for eventing, others for breeding purposes, but the majority are being aimed at serious showjumping careers.

This year, based on the success of all a represented stallion’s progeny in the age-group series classes, the winner was, once again, Corofino II (Corrado I - StPrSt Valeska IV x Fernando I), who has won this title on three previous occasions: 2015, 2016, and 2018. He stands at Xtreme Sport Horses, and has so many champion progeny here that a list is out of the question. However, there’s one absolute standout: the NZ Warmblood, Windermere Cappuccino (Corofino II - Vespa x Voltaire II), who won all of his age-group series, and followed these up with a win in the NZL World Cup League as an eight-year-old. Cappuccino is now nine, and the current leader of this year’s World Cup and Premier League standings. You will be reading plenty more about this horse.
Corofino II himself arrived in this country in 2009, with 28 wins and 105 placings on his European jumping record – and sired talented progeny there too. He is a full brother of Corofino I.

The beautiful bay Belgian Warmblood, Lanice van de Heffinck (Plot Blue - Hades van de Heffinck x Contact van de Heffinck), won this title, which is presented to the top performer in the show’s 1m30 mare class. There was a good-sized field in the class, and five in the jump-off. The lovely Lanice was bred by Van de Heffinck BVBA and ridden by Jaime Tiller, for owners Takapoto Estate. She was imported from Belgium as a foal, and has so far competed up to 1m40.  Through her grandsire, Contact van de Heffinck (Concept - Ms Franziska x Corrado I), she carries the blood of the great Clinton: Ms Franziska is that legend’s full sister.
Runner-up in the mare class was an NZ Sport Horse, Be Mine NZPH (Untouchable M - Xena NZPH x Cacao Courcelle), bred by New Zealand Performance Horses and owned and ridden by Duncan McFarlane. Third place went to Henton Serenade (Satisfaction - Distancia x Distelfink) bred by Henton Lodge, who are having a great season in all disciplines. H. Serenade is owned and ridden by Bailey Rutter.

This year’s top breeder award went to Takapoto Estate, an operation that has made a big name for itself in a short space of time. Takapoto’s main goal is to breed horses capable of jumping at elite European levels, and it has some excellent imported mares in its band, including several who have proven themselves internationally: the Hanoverian Claire (Chasseur I - Mondolina x Goldstern), the BWP Estina (Heartbreaker - Secret Love Wonderland x Libero H), and the Zangersheide Cuba d'Esquelmes Z (Chellano Z - Quassie d'Esquelmes x Canadian River). There are some super Takapoto youngsters in the pipeline, and, as mentioned above, the stud’s brilliant import, Lanice van de Heffinck, was the show’s leading mare. She is also the dam of Takapoto China, a mare who came fourth in the four-year-old championship (see below)...To read the complete article you need to be a subscriberCLICK HERE TO SUBSCRIBE TO BREEDING NEWS 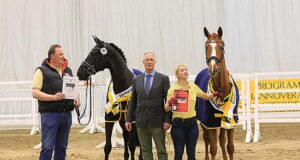