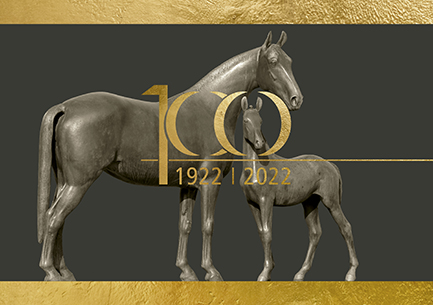 The Hannoveraner Verband has become one of the most successful riding horse breeding societies, with its trademark distinctive 'H' made with horses' heads. Producing some of the best sport and pleasure horses around the globe, its basis of Thoroughbred mare lines have a long tradition and significantly influenced other sport horse breeds. With this expertise, the Hannoveraner Verband is a solid foundation for modern sport horse breeding.

Shortly after the First World War, visionary breeders had come together to initiate a union of Hannoveraner horse breeders and to establish a corresponding organization. At that time, Hannoveraner breeding already had a 200-year tradition. Since the foundation of the Celle State Stud in 1735 by King George II, not only stallions were made available to the rural breeders in the Kingdom of Hannover, but since 1790 all coverings by the state studs were registered and foal certificates issued. It was not until 1888 that the 'Hannoversches Stutbuch für Edles Warmblut' (Hannoveraner Studbook for Noble Warmblood ) was founded, the predecessor of the Hannoveraner Verband. Even then, main societies were the direct contact to the local horse breeding clubs and breeders. Until today the structure of Regional Societies and delegates has remained.

The Verden Auctions set a trend and are still a model for many other breeding societies and sellers today. Hans Joachim Köhler laid the foundation for this successful idea in 1949. What could be more natural than to secure quality directly at the source? Around 800 horses - from foals and two-and-a-half-year-old stallions to broodmares and riding horses - find a new owner every year in the Niedersachsenhalle. Many world careers have started at a Hannoveraner auction.

Hannover's genes and know-how are sought after worldwide. Not only since its nationwide recognition in 2007 has Hannover been represented around the globe with daughter societies and horse breeding clubs. As early as 1975, the Hannoveraner Verband merged with the East Frisian studbook. In 2005, the Verband of Hessian Horse Breeders joined, and in 2014, the Rhineland Riding Horses Studbook. They all trust the high quality and competence of the Hannoveraner Verband. Because in addition to breeding and marketing, young breeders, consulting, science and research are an important part of the Verband's work. The grounds on Lindhooper Straße have developed into an absolute hotspot. Not only the auctions and the stallion licensing attract numerous visitors from all over the world to Verden, but also the Herwart von der Decken-Show and the major Verden shows with the Hannoveraner Championships have an irresistible appeal.
"For our Hannoveraner Verband, the challenges will be great. In the past decades, the development towards a service society has begun. On a day-to-day basis, however, it is about being an important support for our breeders," says the chairman of the Hannoveraner Verband, Dr. Hinni Lührs-Behnke. "Our members drive their breeding with passion, love for horses, tact and individual ideas!"

Jubilee Ball
An anniversary celebration ball with dinner and dancing will be held on September 24 in the Niedersachsenhalle.

Festive outfit is desired
Tickets can be ordered here: ticket@hannoveraner.com