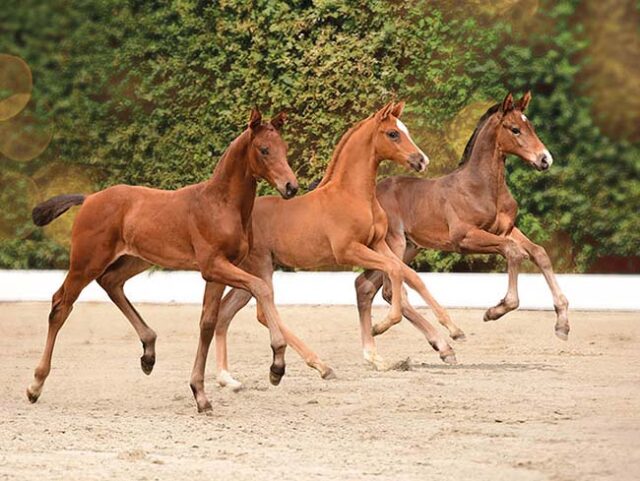 August 21 will be the next red letter day on the Holsteiner Verband’s calendar as it lists their next auction and when the 2021 generation of elite foals will be for sale. Marketing manager Roland Metz and his team have selected around 65 offers for this highlight event.

An interesting mixture of pedigrees will be available, either by well-proven sires like Casall (Caretino), Clarimo (Clearway), Cornet Obolensky (Clinton), Vingino (Voltaire) or Tangelo van de Zuuhthoeve (Narcos II), or supplemented by special young stallions, some of them presenting their first generation.
Janne Friederike Meyer-Zimmermann’s young talent, Chinchero (Chopin VA [Casall] - Camara VA x Clarimo), will be represented remarkably by five athletic foals. Recently, the four year-old attracted great attention by reaching top prices at the auction held at Waterkant farm.
It may not be his first generation, but the current Holsteiner state champion, Crack (Cornet Obolensky - Operette x Candillo), has already produced top quality. Four foals will represent the six year-old stallion, while Vingino, himself sucessful at top-level sport, will present four foals as well.
A large part of the collection is notable not only for their interesting sires but because also via their dams. Number one in the catalogue will be a colt causing a stir, with Chacco-Blue on his top line and Kannan and Chin Chin on his maternal side. Christenen Culeo, his dam is Goya van’t Roosakker, one of the most desired Belgian mares. Famous names like Cella (Cento), ridden by Ben Maher, or Equador van’t Roosaker (Kevin Staut) are half-siblings of this foal’s dam. And that isn’t all. There will be a filly available by Cumano’s son, Corfu de la Vie, out of the same dam as Laura Klapphake’s Camalita (Quinar).

<a href="https://breedingnews.com/subscriptions2019/">CLICK HERE TO SUBSCRIBE TO BREEDING NEWS</a>
SUBSCRIBERS CAN READ THE COMPLETE ARTICLE BY LOGGING IN AND RETURNING TO THIS PAGE