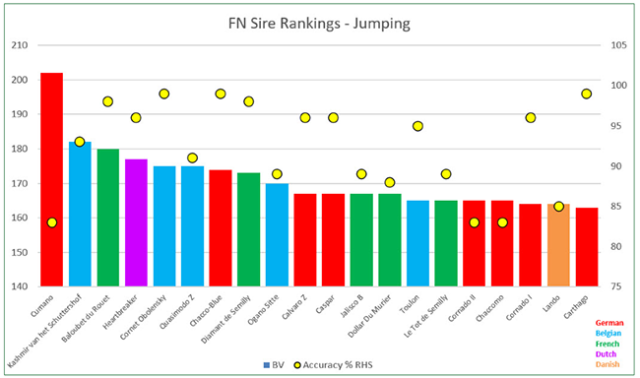 Reading the German FN rankings, you have to remind yourself that, yes, these are the GERMAN not the WBFSH rankings, since of the top 20 jumping sires, 12 are foreigners. Dial the clock back a decade and look at the 2009 FN rankings, and yes, the Belgian-bred (but he did his licensing in Westfalia) Cornet Obolensky (Clinton x Heartbreaker) is in second place with a value of 165.

Third comes the Dutch-bred, Now or Never M (164) – but he is by the Hanoverian, Voltaire, who was shunned in his home country and shunted off to the Netherlands. Now or Never M is out of a mare by one of the greats of Dutch breeding, Nimmerdor – solidly Holstein on his top line, Dutch on the mare line.
That’s it, two out of 20. For the record, and because it is worth looking back to see how accurate a predictor the German numbers have been, here’s the top 20, largely dominated by the following (plus the aforementioned imports):
• Stakkato (Spartan x Pygmalion) in pride of place with a jumping breeding value of 171
• Stakkato Gold (Stakkato x Werther), 164
• Satisfaction (Stakkato x Calypso II) 159
• Contendro I (Contender x Reichsgraf) 158
• Stolzenberg (Stakkato x Sandro) 158
• Cardento (Capitol x Lord) 157
• Clinton I (Carolus x Calypso II) 156
• Dutch- based solidly Holstein bred Indoctro (Capitol x Caletto II) 154
• Albano (Acord x Landadel) 153
• Lissabon (Lordanos out of a Dutch mare by Sion) 152
• Chambertin (Cambridge x Cor de la Bryère) 151
• Perpignon (Pilot x Watzmann) 150
• Askari (Acord II x Lavall I) 150
• Calido (Cantus x Coriander) 150
• Cordalmé (Cor de la Bryère x Almé: for all the strenuous resistance to French blood, it slipped into Germany thanks to Almé's time at Zangersheide, largely through his son, Ahorn Z, the sire of Acord - and of course, the Holsteiners loved their French import, Cor de la Bryère so much that 'Corde' was sort of an honorary German) 150
• Escudo I (Espri x Arkansas) 150
• Monte Bellini (Montender x Ramiro) 149.

It is a very different picture on the 2020 values. Let's look at the new value Zuchtwert Höchste erreichte Klasse, or highest level in competition, where the horses are evaluated on the basis of a points table with points awarded according to which performance level in competition their progeny have reached.
There is the German stallion, Cumano (Cassini I xLandgraf) in the top spot with a value of 202, but the next five places are filled by foreigners: Kashmir van het Schuttershof (Nabab de Rêve x Tenor Manciais) 182; Baloubet du Rouet (Galoubet A – the shibboleth is broken, TROTTER blood on Galoubet's dam side x Starter) 180; then the Dutch star, Heartbreaker (Nimmerdor x Silvano), 177; Cornet Obolensky has dropped to equal fifth on 175 with Quasimodo Z (Quidam de Revel x Carthago).
Seventh, Chacco-Blue (Chambertin x Contender), 174 followed by two foreigners, Diamant de Sémilly (Le Tot de Sémilly x Elf III) 173, and Ogano Sitte (Darco x Avonteur) 170. Tenth for Calvaro (Caletto I x Capitol), 167; Caspar/aka Berlin (Cassini I x Caretino) 167.
Then come a couple of French gentlemen, Jalisco B (Almé x Furioso xx) tied with his son, Dollar du Murier (out of a Uriel mare) on 167; the Belgian, Toulon (Heartbreaker x Jokinal de Bornival), 165; one of the French greats, Le Tot de Sémilly (Grand Veneur x Juriste) also 165; a couple of Germans, the Westfalian, Cornado (Cornet Obolensky xAcobat I) 165; Chaccomo (Chacco-Blue x Cento) 165; the Dane, Lando (Lancier x Raimondo) 164; Carthago (Capitol x Calando I) 163; and we round out our top 20 with that hero of Belgian breeding, Darco (Lugano van la Roche x Codex), a nice amalgam of Hanoverian, Holsteiner and Gelderlander, proving that border hopping is nothing new...
I asked my friend, and Hanoverian breeding expert, Ludwig Christman what was happening, why were foreigners dominating the FN ranking: “About the high percentage of foreign stallions in the FN-rankings: The breeding value ‘highest level achieved’ is quite new and you cannot compare it with the rankings in 2009. However, we have to analyse the contribution of foreign stallions in this evaluation system. At the moment it includes also imported horses and even horses from other countries, who just competed in Germany. The possible effect could be that just the top horses of some stallions are counted, but not the more normal ones, which every stallion also produces. But this is just a hypothesis, which should be checked.”
It was something of a tragedy for jumping breeding that Cumano was almost infertile for much of his career – his early crops were reasonable – but towards the end of his life it required the magic of ICSI to produce a foal. Cumano died in September 2018... To read the complete article you need to be a subscriber