Home News flash A Foal sale for breeders, by breeders 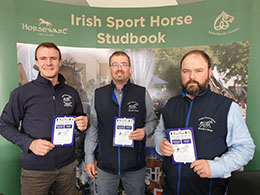 On Saturday, October 5, the Mayo Roscommon Breeders Group will host their second sale comprising a collection of showjumping, eventing and traditional Irish-bred foals, specifically selected for breeding and performance. In total, over 60 foals will go under the hammer from such illustrious sires as Kannan, Cormint, Contendro I, Air Jordan Z, Vivant van de Heffinck, Narcos II, Taloubet Z, and Diarado.

The Mayo Roscommon Breeders Group was established in 2009 by founding members Patrick Hester Jnr., Mark Hester, Noel Kilroy, and the late Jariath Cummins, to create a group of like-minded performance horse breeders. The group annually hosts a show where foals are linear scored for their breeding and performance traits while being presented at liberty alongside their dams. Foals included in the sale were selected from a number of venues around the country.

In 2018, 36% of all the foals sold went to overseas buyers, including Belgium, Sweden and the UK. Formerly from Roscommon, Patrick Hester is now based in Norway and is the group's newly appointed European and Scandinavian representative, alongside sales team members Noel Kilroy (chairman), and John Murphy (operations).

The sale will take place at Mullingar Equestrian Centre, Co. Roscommon – just over one hour from Dublin International Airport.